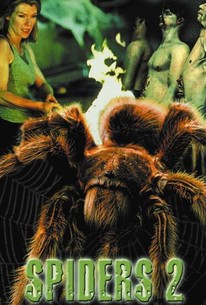 Eerie special effects highlight this thriller about genetically enhanced spiders. After a couple become stranded at sea, they are picked up by a huge ship, whose crew is working on a secret experiment involving spider DNA. When the experiment goes wrong, the terrified husband and wife fight for their lives against an army of giant spiders. Stephanie Niznik, Greg Cromer, Richard Moll, Daniel Quinn.

Velimer Velev
as Spider
View All

A case of dreary idiocy which is a slog to watch.

Not entirely bad, unlike the first film, it was set entirely on a ship, still with lots of spiders. It's a typical meddling people stumble upon some conspiracy then have to fight for their lives. To say the least, it's not a bad sequel, but could have been much better.