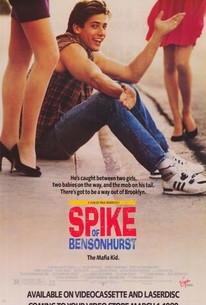 In this comedy drama, Spike Fumo (Sasha Mitchell) is a Brooklyn streetfighter with pugilistic aspirations. With Spike's mafioso father in Sing Sing, mobster and former fighter Baldo Cacetti (Ernest Borgnine) looks out for Spike by getting him some bouts and every once in a while convincing the fighter to throw a match. When Spike meets and falls for Baldo's daughter Angel (Maria Patillo), Baldo suddenly sours on Spike. The father wants Angel to marry the college-bound son of a cocaine-snorting congresswoman (Sylvia Miles), and Baldo only envisions Spikes' future as being a mob enforcer. Eventually, Spike moves away from his embittered lesbian mother (Geraldine Smith) and moves in with the Puerto Rican boxer Bandana (Rick Aviles). He soon has two women pregnant in two different neighborhoods as he contemplates his future.

Critic Reviews for Spike of Bensonhurst

[Spike of Bensonhurst] is not the best comedy ever made but has energy and local color and a charismatic lead performance by Sasha Mitchell as Spike.

In a witless way goofs on Italian gangsters.

Audience Reviews for Spike of Bensonhurst

There are no featured audience reviews yet. Click the link below to see what others say about Spike of Bensonhurst!