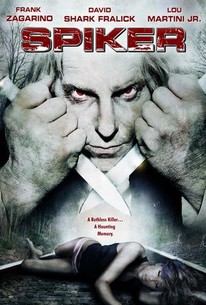 A hulking Albino serial killer escapes from an asylum and returns to his former hunting grounds to stalk a group of teenagers in this stalk and slash shocker from written, directed by, and starring Frank Zagarino (Fitness for Life, Project: Shadowchaser). Years ago, the Spiker terrorized a small community by slashing his victims to shreds with railroad spikes and burying their bodies beneath the railroad tracks on the outskirts of town. These days the Spiker is rotting away in an institution, never to see the light of day again; at least that's what the haunted locals say in order to get a good night's sleep. When the authorities attempt to transport the Spiker and he stages a daring escape, his bloodlust becomes stronger than ever before. Now, in the small town where the legend of the Spiker was born, a new chapter in his dark saga begins. A group of bored teens have decided to camp out in an abandoned house, and just as they uncover a chilling secret, the Spiker returns to finish the job he began so many years ago.

Elizabeth Giordano
as Ghost
View All

There are no critic reviews yet for Spiker. Keep checking Rotten Tomatoes for updates!

There are no featured audience reviews yet. Click the link below to see what others say about Spiker!