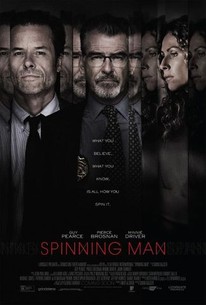 Evan Birch (Guy Pearce) is a family man and esteemed professor at a distinguished college, where his charm and reputation have made his philosophy class very popular. When a female student named Joyce goes missing, Evan's previous off-campus dalliances make his wife (Minnie Driver) question his alibi. Gruff police Detective Malloy (Pierce Brosnan) has even more reason to be suspicious when crucial evidence makes Evan the prime suspect in Joyce's disappearance. Suddenly, the questions Evan faces aren't merely academic--they're a matter of life or death.

A Quiet Place and Blockers Are Certified Fresh

Devoid of suspense and purpose, Spinning Man doesn't spin. It doesn't even move. Another case of the right actors in the wrong picture.

Of the many interchangeable, name-lead thrillers and action pictures concurrently premiering these days in theatres and on VOD, this one's definitely a cut above.

Can a movie devoid of thrills be called a thriller?

Like so many "tricky" noir thrillers that are contrived B-movies at heart, it jerks our expectations around and turns toying with the audience into a kind of formalist stunt.

It moves along at a steady clip, and Brosnan, Pearce, and Driver are actively engaged with the heady approach to telling an otherwise recognizable murder mystery.

This little thriller, part lurid potboiler and part philosophical quandary, plays like a sturdy "B" movie; it won't change the world, but it might keep late-night viewers from changing channels.

It stumbles in the third act by indulging in too many incoherent twists and false endings, becoming detached from reality in the process.

In a different version of this material ... Evan might have worked as more than an intriguing idea.

"Spinning Man" isn't a pulse-pounder, but it remains an intriguing study of denial, offering atypical attention to the concept of guilt.