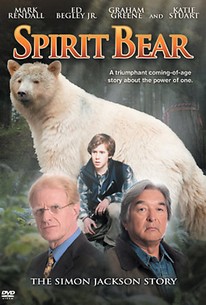 Spirit Bear: The Simon Jackson Story concerns an awkward teenager who, after being attacked in the forest, befriends a Kermode bear. He soon learns that the bears are seriously endangered. The boy grows out of his shell and begins a political campaign to save his large furry friends. ~ Perry Seibert, Rovi

A solid family movie with relevance, and that's rare.

There are no featured audience reviews yet. Click the link below to see what others say about Spirit Bear: The Simon Jackson Story!