The Spirit of the Beehive (El Espíritu de la colmena)2006

The Spirit of the Beehive (El Espíritu de la colmena) (2006) 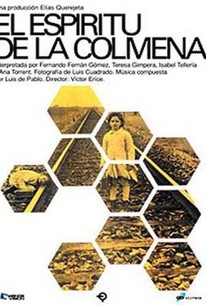 Eight-year-old Ana lives in a close-knit Castillian village with her daydreamer mother Teresa, older sister Isabel and father Fernando, who tends beehives for a living. After watching James Whale's 1931 version of Frankenstein with Boris Karloff, little Ana becomes convinced that the monster in living in one of the nearby, rundown houses. When an escaped convict seeks refuge in one house, Ana believes she has finally met the monster of her nightmares.

Jose Villasante
as The Monster

Juan Margallo
as The Fugitive

Jose Villasante
as The Monster

Miguel Picazo
as The Doctor

[Ana] Torrent guilelessly captures the terror and wonder of imagination's possibility that so informs childhood experience.

Spirit of the Beehive is the sort of slumbrously sensitive item that tends to give art films a poisonous reputation... seems to believe in the infinite evocative power of long, ponderous, static takes.

It's a film that transports us back not just to the sights and sounds of childhood but to a core of sweet innocence and sometimes ignorant bliss.

This is a modest marvel of grace and framing that unfolds with the patience of a cloud and is driven more by wonder than pure emotion.

Those who haven't seen it since the '70s may find themselves amazed all over again by its lyrical potency and grace; those who have never seen it may wonder how it can be that a film this great isn't shown somewhere all the time.

Erice clearly intended this as a discourse on the septic influence of Franco's reign on Spanish civilian life.

... is not a form of evasion, but a form of knowledge, an abrupt and precocious learning about the mysteries of life. [Full review in Spanish]

There is another world that underlies this one: a world of darkness, silence, open space and enormous forces moving in the distance.

Lyrical and magestic, Erice's film is one of the most compelling fables about haunted childhood.

A most exceptional vision of the inner life of a child just learning about the darker complexities of life.

Considered by many as one of the key Spanish films of the Seventies.

A brilliant and spellbinding sociopolitical commentary told in a most symbolic way (and with a gorgeous cinematography) as a fabulous tale of loss of innocence centered on a sweet 7-year-old girl who discovers evil at the heart of her beehive-like world in Francoist Spain.

After seeing a touring print of FRANKENSTEIN in 1940s Spain, a young girl is convinced the monster is real and lives in an abandoned farmhouse on the edge of town. This movie is too slow for its own good---it takes an hour for the first major plot development, and for the young actress to discover a second expression---but the seriousness and artistry can't be overlooked.

A young person learning about death is universal, but here in Spirit of the Beehive it's filtered into a very specific situation: a girl coming to grips with mortality in the shadow of the Spanish Civil War, through a viewing of James Whale's Frankenstein. Perhaps not the most relatable set of circumstances, Victor Erice renders it accessible for all audiences by his austere visual style and cute-as-a-button Ana Torrent. A bit ponderous and maybe sort of de-oxygenated (why so many pauses?), but potent at the end of it all.

If only they had better monster makeup. I jest - wonderful film.