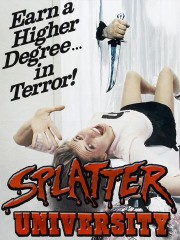 Carlos I
February 18, 2018
One has to be prepared when going into a Troma movie. Once my expectations were in check for a Z-Grade slasher flick, it was actually pretty fun. The lead actress is likeable and the ending is ballsy.

Shawn W
½ December 3, 2016
Escaped mental patient disguises himself as a priest at a local college and kills staff and students. Amateur film making again from Kaufman and Herz. I will admit, the are slightly more adept at horror than comedy.

Michael W
½ August 28, 2016
Bottom of the Troma barrel, opening with a man stabbing another in the groin. Complete amateur production with one-dimensional characters. Good for a look at 80s styles though, many of the students appear to be wearing the same clothes throughout.

David T
July 15, 2014
Not bad, but not great, this early 80s slasher is firmly held together by likeable lead actress Forbes, as well as a couple of minorly gruesome kill scenes. If you're not a fan of early 80s low-budget slasher films, there's not much to recommend here. And even then, this probably isn't one you're going to be talking about endlessly with other horror fans.

John W
June 24, 2014
Delightfully terrible. Ridiculous plot and dialogue full of tone-deaf conversations and flat one-liners (you literally expect to hear a rimshot). It must have been a blast to make.

Timothy S
June 28, 2012
There were plenty of bad slasher films in the early 1980's that left such a bad taste in the mouth of so many critics who despised the genre, and "Splatter University" was one of the worst. There's virtually nothing here to like, even if you love these films.

The acting is predictably bad, as is the writing and directing. The problem with this film is that it's especially horrible in the areas where it should excel, like the murders and the special effects. They're the only reason to see films like this, and the murders here don't live up to the sensationalistic title. The killer uses a knife to gut or slice many of his victims, and the make-up is not very convincing.

And speaking of the killer, the final reveal here is pretty obvious no matter how hard the film tries to steer you in the wrong direction. If you didn't see it coming, you must be very new to these types of flicks. Everything about this one is exceedingly lazy, from the sparsely decorated sets to the routine characters. The priests are all lustful and full of sin, the men are pigs and the women are all victims simply to be slaughtered. There's not one male victim here, and even the lead actress is killed in what may be the film's only surprise. It's so misogynistic that even the male killer's life is spared.

The "action" allegedly takes place on a college campus, but everything from the setting to the students suggest more of a high school feel. These kids behave like the Sweathogs from "Welcome Back Kotter". Despite what a lot of people think, there is good and bad in every genre of film, and "Splatter University" is one of the worst of its type you're likely to see. There's a threadbare plot, a boring cast and and dull killings. When you can't even get the deaths right, there's a problem somewhere.

Hobie P
January 8, 2012
Another decent slasher but only if your a slasher fan!

Candice M
March 21, 2011
The only thing I found to be good about this movie, at all, was the mystery veil it kept over the true killer's identity. Apart from that, this movie is almost as cheesy as one can get in the horror genre. Granted it has a few mildly funny moments, but the movie is all-around boring and ridiculous.

February 9, 2011
Slaughter High, Splatter University, they're all the same, except this is 79 minutes (um.....RUN! Lmao). The trailer is 1:43 minutes and is the slowest moving trailer I've ever seen. I can't believe the announcer called this "Splatter U" at the beginning...it's 1984, you can be a little more conscientious than that. I wanted to know if this was a whodunit so when I read "mental patient escapes" from the synopsis I wanted to skip this but there's a plot twist that just might make things interesting.

Al M
November 13, 2010
While not technically a Troma film, Splatter university does feature Richard W. Haines as its director, who is most famous for directing the Class of Nuke 'Em High. And Splatter University features a similarly crappy/humorous aesthetic as Troma's b-movie cinema. But Splatter University proves more entertaining to me than some of Troma's garbage--it features a steady alternation of gruesome gore and bizarrely trashy humor. A truly entertaining piece of garbage, Splatter University is a slasher film that should not be forgotten by Slasher aficionados who are willing to accept satirical entries in the genre.

Senor C
October 5, 2009
A pitiful slasher flix which showed a little promise @ the beginning (I loved seeing that orderly stabbed in the groin but Im just a sick bastards). Students @ a local University are being killed off by stab or slice (how that girl ever died from a slash across he forehead I'll never know) as a new teacher tries to figure out who the killer is. I figured it out but that dumb bitch was way off. I'll let you know it is one of the staff so you would figure that they checked references better than they did

dcdsxc w
½ August 20, 2009
What we have here is a typical 80's slasher, but, there is something different about this one. There are way to many screw ups. Stand-outs include poking fun at religion, hiding porno mags in a dumpster, the main character of the movie gets killed off during the middle, out of nowhere. Which makes the rest of the film a snooze fest, although not quite. The story seems to revolve around a small love triangle between a young teacher and another teacher she meets, moving in to a new house, and a crazy guy who escapes from a mental hospital disguising himself as a priest. There is one thing I give this film alot of credit for, and that's the way everything turns out. It keeps you guessing on what will happen next. You won't fiind out anything until the end of the movie, of course. If you're a fan of old slashers, give this one a watch, but don't expect much except for the twist ending.

AntwonFisher
April 14, 2009
I LOVE this film~ it is in my all time cheesy favourite 80s slasher flicks! hilarious- pretty decent blood and francine forbes does one hell of a performance~!! "hey guys- lets party!"
Page 1 of 2