Splendor in the Grass1961 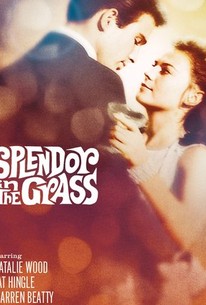 Splendor in the Grass Photos

1961's premiere "date" movie represented the screen debut of Warren Beatty. Set in the 1920s, William Inge's screenplay concerns the superheated romance between working-class high schooler Natalie Wood and rich kid Beatty. Trying their best to keep their relationship from going "all the way," Beatty and Wood go through a series of unsatisfying interim romances. The troubled Wood attempts suicide and is sent to a mental institution, while Beatty impregnates freewheeling waitress Zohra Lampert. Wood and Beatty still carry a torch for one another, but circumstances preclude their getting together -- and besides, Wood suddenly realizes that she's outgrown the still-floundering Beatty. Scriptwriter William Inge shows up as a minister in Splendor in the Grass, while comedienne Phyllis Diller does a cameo as famed nightclub entertainer Texas Guinan; also, keep an eye out for Sandy Dennis, making her first movie appearance.

Phoebe Mackay
as Maid
View All

Critic Reviews for Splendor in the Grass

There is something awkward about the picture's mechanical rhythm. There are missing links and blind alleys within the story.

Splendor in the Grass is a prestigious, top-of-the-line, sensitively-handled melodramatic literalization of the axiom "If you touch yourself too much, you'll go crazy."

A complicated film that never really successfully yokes together the themes of money-making and sexuality, it reveals both Kazan's operatic sensibility and his inability to follow an argument rigorously through.

The authority and eloquence of the theme emerge in the honest, sensitive acting of Mr. Beatty and Miss Wood.

A great part of the blame for the dullness of the film, however, lies with Elia Kazan. On other occasions he has let the camera help the author tell his story. Here, his images are as spongy as the ones that Inge's screenplay suggests.

Having finally ditched the boxed-in theatrical form, Kazan hurls his shrieking restlessness directly at the audience in what seems a last ditch effort to summon up the memorializing grandeur of latter-day George Stevens direction.

The late '20s setting comes into play again when the market historically crashes, but this tale isn't specifically confined to this era - nor is its originality.

If Splendor in the Grass is the truth, simple or complex, about men and women, then I've been living in a fool's paradise for fifty-five years.

An excellent critique of a specific historical moment in US history and reveals the flaws that were present in its belief system.

The psychology may be simplistic, but the powerful portrayals from the cast - especially from Beatty - make that weakness seem like an irrelevance.

Audience Reviews for Splendor in the Grass

A "big" Hollywood movie in its day, represented by dint of extravagant color, large, swelling musical scores, and turgid acting about an "important" issue of the day, in this case: young lust. This can't turn out well and it doesn't (Hollywood was doing all it could to defeat television in those days), but along the way we get Natalie Wood and Warren Beatty in their youthful heyday, a decent script by William Inge, and fine character work by the supporting cast.

The definitive bucket of cold water movie about the hormones that swept America. Warren Beatty finds his Stanley Kowalski and Natalie Wood gives one of the essential female performances in American film.

A very well acted film that just ins't my cup of tea.

If there is a heaven, it simply must involve being loved by Natalie Wood. I have only seen Rebel Without a Cause, but after this incredible, emotionally riveting performance, there are certainly more of her films added to my queue. In addition to possessing the physical beauty that we simply don't celebrate anymore, she embodies this character with raw intensity, recognizing the complexities and themes of the story. In this performance, she is "actor as character" and "actor as storyteller" - an oft-overlooked combination. The story, penned by William Inge, is part morality tale, part universal truth. The film reverses the typical dictates about pre-marital sex and suggests that the constant pressures of being "untainted," "pure," "unspoiled," and "a nice girl" cause more moral degradation than they prevent. Additionally, the characters all see women as fitting into two distinct categories: they are either whores or wife material, a condition which is explained starkly by Mrs. Loomis: "A woman doesn't enjoy those things the way a man does. She just lets her husband come near her in order to have children." As a result of such sexual repression and categorical thinking, the film shows the inevitable descent of two good people. But their descent is marked both by the effects of their environment and by the simple fact that adulthood always disappoints the idealism of youth, a theme the title of the film evokes. The film has two very minor flaws. First, I thought the under-handed images of sexuality were over-used; how many times do I have to look at a waterfall? I understand the censorship of the time, but Kazan could have added a train going through a tunnel just for variation's sake. Second, Beatty seems to betray some inexperience here and there, unsure when to play subtlety and when to release. Overall, Natalie Wood makes this film a sheer joy to watch, and as long as men continue to tell women what is valued about their bodies and their sexuality, the themes in this film will remain relevant.

Splendor in the Grass Quotes