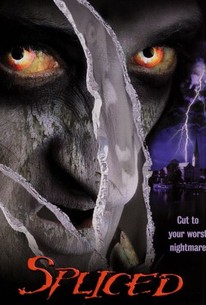 Young and troubled teen Mary (Liane Balaban) is obsessed with horror movies -- aren't we all! -- and refuses to stop watching them even though she has hideously bloody nightmares and sleepwalks into traffic. Her school psychiatrist (Ron Silver) is powerless to keep her from seeing a new hit movie called "The Wisher," in which a pale-faced, razor-fingered, cloaked demon obeys wishes in the most terrible manner. What do you know, once Mary sees the movie, her wishes start coming true, which is bad news for her dad and friends. Mary suspects someone, perhaps that cute boy who has a crush on her (Drew Lachey, singer for boy band 98 Degrees), is committing these awful crimes -- or could it be a supernatural being after all?

Billy Morton
as Earl
View All

There are no critic reviews yet for Spliced. Keep checking Rotten Tomatoes for updates!

Very scary, I gotta admit. But some parts here and there were a little "slow." But it did have a good story, awesome antagonist, and a frightening conclusion, with some pretty cool blood\death scenes.

This is an independent "slasher flick" in which our protagonist is supposed to be "horror savvy", but she is only addicted to horror movies because fear is her kink (the Kinsey institute has confirmed that some humans show heightened arousal when viewing violence before engaging in sexual activity so it's about time a horror plot mentioned this!). The "killer" who emerges from the film to haunt her real life does not look that scary, and this plays out more like an episode of "The Outer Limits" than a feature. Still, it is better than the typical over-budgeted fair that is picked up by monopolizing giants like Landmark and AMC, as it doesn't suffer serious acting problems, and the plot is actually coherent and without gaping holes.