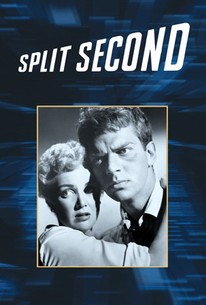 Actor Dick Powell made an impressive film debut with the taut atomic-age suspenser Split Second. Convicts Stephen McNally, Paul Kelly and Frank DeKova escape to a ghost town in the Nevada desert. Only it isn't exactly a ghost town, but a "dummy village" constructed for the purpose of A-bomb testing. The criminals hold several hostages, including reporter Keith Andes, nightclub singer Jan Sterling, selfish socialite Alexis Smith, her doctor-husband Richard Egan and her newest boyfriend Robert Paige. Andes suspects that the deserted town is at Ground Zero of the latest bomb test, but he can't convince the convicts until it's almost too late. The best and most horrifying sequence occurs near the end, when the criminals, accompanied by the duplicitous Ms. Smith, discover that they're driving towards the A-bomb target instead of away from it. Novelist Irving Wallace collaborated on the script of Split Second with Chester Erskine and William Bowers.

Actor Dick Powell's first effort as a director is a brisk, believable suspense story about an escaped convict.

There are no featured audience reviews yet. Click the link below to see what others say about Split Second!