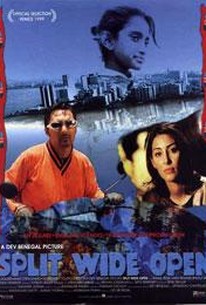 The sophomore feature effort of documentary filmmaker Dev Benegal is this portrait of the changing culture of modern-day Bombay. KP (Rahul Bose) is a small-time hustler working for the "Water Mafia," which sells well water from poor neighborhoods to the rich. He adores his ten-year-old adopted sister, who ekes out a meager living selling flowers at traffic intersections. When KP runs afoul of the Water Godfather, he is promptly dumped from the ring and beaten to a pulp. More frighteningly, his sister mysteriously disappears. Meanwhile, British-educated Nandita (Laila Rouass), who has just returned to India, hosts a popular talk show in which anonymous participants reveal their most intimate sexual secrets. As KP continues his desperate search for his missing sibling, he and Nandita begin an affair that never could have happened during India's more tradition-minded past. Split Wide Open was screened at the 1999 Venice Film Festival and the 1999 Toronto Film Festival. ~ Jonathan Crow, Rovi

Arti Gosavi
as Arti
View All

There are no critic reviews yet for Split Wide Open. Keep checking Rotten Tomatoes for updates!

There are no featured reviews for Split Wide Open at this time.