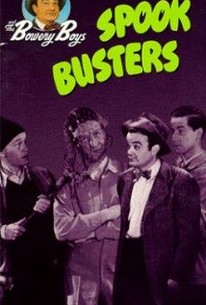 The first of the Bowery Boys' "haunted house" comedies, Spook Busters casts the boys as recent graduates of Exterminators' School. Setting up headquarters in Louie's Sweet Shop, Slip (Leo Gorcey), Sach (Huntz Hall) and their pals are hired by Mr. Brown (Chester Clute) to rid a forbidden old mansion of its various bugs and insects. Once they arrive on the premises, the Boys must deal with "pests" of a human variety-namely mad scientist Dr. Coslow (Douglass Dumbrille) and his assistants (Vera Lewis, Charles Middleton and Richard Alexander). The fun really begins when Coslow prepares to use Sach as a guinea pig for his latest diabolical experiment. The film's highlight is the obligatory fight scene, lensed on this occasion in ultra-slow motion! Gabe Dell makes his return to the Bowery Boys fold as returning GI Gabe Moreno, here equipped with a French war bride (Tanis Chandler) who would never be seen again after this film. One strongly suspects that Spook Busters was seen several times in childhood by Dan Aykroyd, Bill Murray, Harold Ramis and other members of the Ghostbusters cast. ~ Hal Erickson, Rovi

Charles B. Middleton
as Stiles

There are no critic reviews yet for Spook Busters. Keep checking Rotten Tomatoes for updates!

There are no featured reviews for Spook Busters at this time.