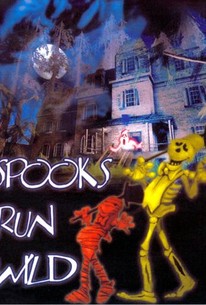 The East Side Kids meet Bela Lugosi in the satisfying comedy-mystery Spooks Run Wild. In trouble as usual, the Kids-Mugs (Leo Gorcey), Glimpy (Huntz Hall), Danny (Bobby Jordan), Scruno ("Sunshine Sammy" Morrison), Skinny (Donald Haines) and Pee-wee (David Gorcey)-are sent to a New England mountain camp to get them away from bad influences. As it happens, the camp is abuzz with the news of an elusive sex murderer who has been preying on beautiful women. Forced to take refuge in a spooky old mansion, the boys become convinced that their host, a sinister gent named Nardo (Bela Lugosi), is the killer whom the police are seeking. While our heroes busy themselves alternately escaping from and converging upon poor Nardo, the real murderer (whose identity is fairly obvious from the outset) continues to roam the countryside-and it looks as though camp nurse Linda Mason (Dorothy Short) will be his next victim. Despite a solid screenplay by Carl Foreman (light-years removed from such later films as High Noon and Bridge on the River Kwai), the East Side Kids adlib most of their dialogue with reckless abandon-and as many observers have noted, Bela Lugosi doesn't seem too happy with these script deviations.

The only real horror is in how unfunny is the juvenile comedy.

There are no featured audience reviews yet. Click the link below to see what others say about Spooks Run Wild!