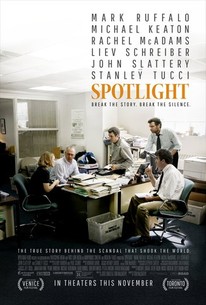 Critics Consensus: Spotlight gracefully handles the lurid details of its fact-based story while resisting the temptation to lionize its heroes, resulting in a drama that honors the audience as well as its real-life subjects.

Critics Consensus: Spotlight gracefully handles the lurid details of its fact-based story while resisting the temptation to lionize its heroes, resulting in a drama that honors the audience as well as its real-life subjects.

Critic Consensus: Spotlight gracefully handles the lurid details of its fact-based story while resisting the temptation to lionize its heroes, resulting in a drama that honors the audience as well as its real-life subjects.

SPOTLIGHT tells the riveting true story of the Pulitzer Prize-winning Boston Globe investigation that would rock the city and cause a crisis in one of the world's oldest and most trusted institutions. When the newspaper's tenacious "Spotlight" team of reporters delves into allegations of abuse in the Catholic Church, their year-long investigation uncovers a decades-long cover-up at the highest levels of Boston's religious, legal, and government establishment, touching off a wave of revelations around the world. Directed by Academy Award-nominee Tom McCarthy, SPOTLIGHT is a tense investigative dramatic-thriller, tracing the steps to one of the biggest cover-ups in modern times. (C) Open Road

Neion George
as Waiter at Gala

Shannon Ruth
as Girl at Garabedian's

Daniel Ruth
as Boy at Garabedian's

Spotlight manages the seemingly impossible task of wooing journalists with authenticity while still elevating reporters to hero status, as they battle a formidable and corrupt institution with righteous determination.

Ruffalo gets top billing in the movie, and he brings some wonderfully lived-in behavioral details to his performance -- the quick, terrier-like movements of the head and the bitten-off sentences.

Spotlight giving center stage to unsung warriors for truth who understood telling the story right, without embellishment, without melodramatic editorial excess, was the greatest victory of them all.

Ultimately, the story these journalists chased was about how institutional power degrades when it gets taken for granted.

Spotlight is acted and directed with great urgency -- and a little bit of necessary dread.

What's perhaps most impressive about 'Spotlight' is how they're all complicated people, given the opportunity to gun it, to hesitate, to reach, and to claw.

The power the media has to affect change and expose corruption is one that should never be taken for granted. It takes a special movie like Spotlight to bring this back into focus.

No tights or capes, but this is a film about superheroes.

One of the film's strengths is that it shows the Catholic hierarchy as an essential component of Boston's political and social superstructure.

A glimpse behind the scenes of the Boston Globe's revelatory articles exposing pedophilia in the Roman Catholic Church takes few prisoners and paints the staff of the Globe as heroes who had to put aside their own cherished beliefs to bring about justice.

Horrifying subject. Worse because it's a true story. Good acting. Well made.

Perfectly executed praise of the power of the press. A stellar cast and flawless direction make for an engaging and highly entertaining result. It doesn't even take major shockers to make this such a satisfying and smart movie. It requires some concentration but is ultimately even more rewarding for it.

The best movie of the year. Everything about this movie is on point, the spotlight shone on the mass abuse and widely hidden scandal of the Catholic Church. A hard hitting drama that is not to be missed!

The Boston Globe's special investigators track down the Catholic Church's cover-ups of allegations of priest sexual abuse. Sparse and tense, Spotlight is a rather uncomplicated film about people doing their jobs well. Director Tom McCarthy must have studied All the President's Men because the same themes and terse narrative style reverberate in both films. Although Mark Ruffalo may have gotten the mannerisms and movements of his character down pat, there isn't a flashy or extraordinary performance; the actors, like the film, are just compellingly solid. Overall, this film is a deserving winner for Best Picture even if it doesn't have the extraordinary sequences of The Revenant.