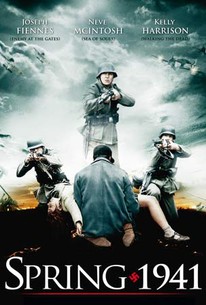 A family struggling to survive is confronted by the specters of forbidden love and betrayal in this period drama from director Uri Barbash. Clara Planck (Clare Higgins) is a gifted cellist whose star is on the rise, while her husband Artur Planck (Joseph Fiennes) is a successful doctor and the father of her two children. But Clara and Artur are Jewish, and in Poland in 1941, that puts them in grave danger as Nazi forces take control of the country and exile Polish Jews to the ghetto. Clara and Artur flee Warsaw for the countryside, where Emilia (Kelly Harrison) offers to take them in allow the family to hide in the attic of her home. Emilia is looking after her farm on her own as her husband has been sent off to war, and she welcomes having Artur around the house to help with the many chores. But what begins as friendship between Artur and Emilia turns into love, and they begin having an affair that leads to her becoming pregnant. If Artur continues the affair, he could destroy his relationship with Clara and his children, but if he rejects Emilia, he runs the risk of having his lover inform on him to the authorities. Aviv 1941 (aka Spring 1941) received its U.S. premiere at the 2009 Seattle International Film Festival.

There are no critic reviews yet for Spring 1941. Keep checking Rotten Tomatoes for updates!

There are no featured audience reviews yet. Click the link below to see what others say about Spring 1941!