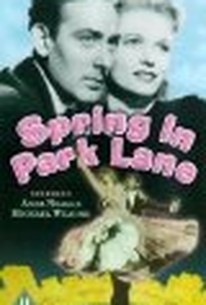 One of many cinematic collaborations between actress Anna Neagle and her real-life husband, director Herbert Wilcox, this light, romantic "drawing room" comedy was Britain's biggest box office hit of 1948. Neagle stars as Judy Howard, the niece of wealthy art collector Joshua Howard (Tom Walls), for whom she also works as a personal secretary. Uncle Joshua's newest employee is a footman, Richard (Michael Wilding), whose aristocratic bearing seems out of place on a lowly domestic servant. As Judy begins falling for Richard and he for her, the plucky girl discovers the truth. Richard is indeed a member of the upper class, hiding out in working class disguise because he believes that he accepted a bogus payment for his family's valuable art collection and fears their wrath. Of course, no one is in a better position to help Richard with his transaction than Judy and her uncle. Voted England's most popular actress every year for nearly a decade after WWII, Neagle's career in America never materialized. ~ Karl Williams, Rovi

Nicholas Phipps
as Marquis of Borechester

Here an old and sorely tried story has been taken and transformed by Nicholas Phipps into a brilliant script bubbling over with gaiety and wit.

There are no featured audience reviews yet. Click the link below to see what others say about Spring in Park Lane!