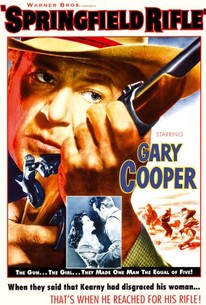 Springfield Rifle was Gary Cooper's third western in a row, released not long after the classic High Noon. Cooper plays Union army officer Lex Kearney, who undertakes a covert investigation to find out why the North's supply of horses has suddenly diminished. Because of the top-secret nature of his mission, Kearney is forced to distance himself from everyone he knows, including his wife Erin (Phyllis Thaxter) and son Jamie (Michael Chapin). Heading to a remote cavalry post, he discovers that renegade soldiers have been stealing horses and selling them to the South. Someone at the post has been operating as the thieves' "inside man," and Lex, posing as a dishonorably discharged soldier, aims to ferret out the traitor. Had it not followed directly on the heels of the critical and financial success of High Noon, Springfield Rifle might have fared better with audiences and reviewers. ~ Hal Erickson, Rovi

Rory Mallison
as Barfly
View All

Gary Cooper in another western, nowhere near High Noon in quality but still better than a lot of 'em.

Visually fine Western, that is as much a crime drama or spy film as a Western.

An incurious Western set during the Civil War days.

There are no featured audience reviews yet. Click the link below to see what others say about Springfield Rifle!