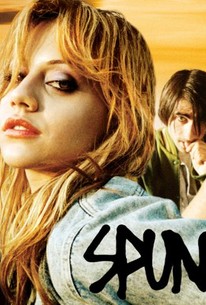 Critics Consensus: A chaotic drug movie that has little substance behind the stylistic flash.

Critics Consensus: A chaotic drug movie that has little substance behind the stylistic flash.

Critic Consensus: A chaotic drug movie that has little substance behind the stylistic flash.

An energetic cast and hyperkinetic direction from music-video wiz Jonas Akerlund drive this black comedy about the world of methamphetamine addicts and dealers. Jason Schwartzman stars as a dropout hired to work for a speed merchant (Mickey Rourke). Former Smashing Pumpkins frontman Billy Corgan composed the music and has a cameo as the Doctor. Mena Suvari, John Leguizamo, Brittany Murphy.

Mickey Rourke
as The Cook

Peter Stormare
as Cop No. 1

Alexis Arquette
as Cop No. 2

Deborah Harry
as The Neighbor

Eric Roberts
as The Man

Billy Corgan
as The Doctor

Like an ex-addict reminiscing over their days of dependence, it's dead behind the eyes: hollowed out.

It never quite convinces you this is anything but a fashion shoot.

A placebo of a film.

Ultimately, Spun has no more substance than American Pie II.

This drug drama has enough drugs to stock a hospital but precious little in the way of drama.

The mix of a fast pace, animated moments, and the always nuts Rourke makes for an entertaining flick

Madly arranged in one ambivalent, entirely creative work that attempts not only to convey a feeling, but a sense of experience

More intent on giving us a day-in-the-life presentation of some speed freaks and their hijinks than actually telling us anything about them. Their actions are meaningless.

Aims for the edge but eccentricity and excess take over and dominate, thus taking the rest of the film down with them.

I don't ever get the story about drug movie, but I like the visualization when someone hit the drugs.

Various meth addicts do various cruel shit. This film is full of stylistic gimmicks: every time a character takes a hit of meth, there is a frenetic special effect, and it is edited so that there rarely is a shot that lasts over three seconds. I'm sure that this might be what it's like to be on meth, but ultimately these gimmicks don't make a film. When I wrote my first sentence, a story synopsis, I didn't know what to write because there isn't a fluid narrative. Additionally, there is not a signal likable character in the film; Jason Schwartzman's character could pass for a hero, but early in the film he handcuffs his naked girlfriend to a bed and blinds and gags her with duct tape - not exactly Atticus Finch. You might say that as a drug film, there shouldn't be any likable characters, but they should at least be interesting or trying to be likable. I think Trainspotting is a good film for comparison. The film basically opens with Renton trying to quit heroin. Of course, he doesn't, but it immediately begins with an admirable goal, one with which we can sympathize. There isn't even the prospect of quitting; even the cops pursuing the addicts are on meth. Overall, the gimmicks that fill this film can do nothing to counter its many glaring flaws.

What a ride, and I finally got around to watching it. Filled with interesting, complex and totally strung out characters...just going on with their everyday lives. Pretty intriguing flick.

This film was great! Many people have compared it to Requiem for a Dream, however I preferred this movie (Because Brittany Murphy is on it). Requiem accurately depicted drug addiction and how low some people would sink for their next hit. It was a very depressing and powerful movie, not one I would ever want to watch again. You leave the theater feeling extremely drained. Spun is altogether different. The only thing they have in common is their central theme. Spun centers around Ross, the fairly normal speed freak as his addiction takes him farther and farther away from reality. Initially, I thought the characters were grossly overacted, however as the movie progressed, the opening sequences did not seem as far removed from Ross' world as I had originally thought. It was very interesting to see Ross' character move farther and farther away from reality. It was only a 3-day all-you-can-consume speed trip, however he started off as a normal guy with a drug problem and ended up on Mars, completely detached from reality. I also thought the cartoon sequences were very effective, they accurately demonstrated his impoverished state of mind while he was tripping. The audience got the impression he really was flying in his own world. It was interesting to see the lifestyles of the other people involved in the drug trade, most had been completely dehumanized by their dependence, living in squalor yet completely unaware of their surroundings. A great film! One that I can watch again for entertainment purposes only, but which also drives home the anti-drug message without being preachy