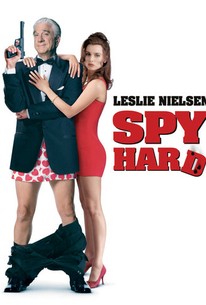 Charles Durning
as The Director

Tina Arning
as Dancer No. 1

Keith Campbell
as Thug No. 2

Carl Ciarfalio
as Thug No. 1

Eddie Deezen
as Rancor Guard Who Gets Spit On

Paul Eliopoulos
as Agent No. 1

Weird Al Yankovic
as Himself

Bruce Gray
as The President

Hollis Hill
as Agent No. 2

Diane Klimaszewski
as Twin No. 1

Elaine Klimaszewski
as Twin No. 2

Austin Kottke
as Boy with Balloons

Kelly Lange
as Herself

Desiree More
as Herself

Gayle Obodzinski
as Dancer No. 2

The jokes come in sporadic volleys rather than the steady machine-gun pace of The Naked Gun and Airplane!, and, with a few exceptions, they are less truly aimed.

Sporadically funny, but never more than a sting of crude gags.

As funny as Nielsen can be, like all comic actors he still needs the quick-thinking jokes and zingy one-liners to be genuinely funny.

Spy Hard just comes off as a long commercial. And yes, that means most of the best moments you've seen in the movie's trailer.

More of a cinematic joke book than a real movie, Spy Hard hits you with gags faster than Henny Youngman on speed. Even when individual bits misfire, the unrelenting barrage of silliness can break down your resistance.

Spy Hard is a loose send-up of the Bond series and other overly expensive action flicks, but after Hot Shots! Part Deux and National Lampoon's Loaded Weapon 1 who needs another action parody?

This spy parody from 1996 feels very much of its time.

The result is 80 brief minutes of movie skits assembled in an order that sort of resembles a plot.

The movie will be of interest only to Nielsen's most devoted fans and to those who wonder why Nicollette Sheridan never made more movies, or more swimsuit calendars.

The blockbuster action thriller genre is ripe for sending up, but this lazy effort has to go down as a miss despite the presence of spoofmeister Leslie Nielsen.

Yet another Leslie Nielson movie parody, targeted this time at James Bond pictures and their many spinoffs.

Leslie Nielson does a funny James Bond spoof, which is actually better than some of the James Bond movies! I liked when he was attempting to sneak into someone's apartment, and ends up trashing the entire place.

Another spoof starring Leslie Nielsen sending up Die Hard, Jame Bond and plenty of other action films. Will raise a few laughs but not the best spoof around.