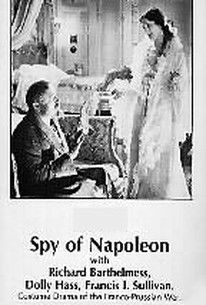 Hollywood star Richard Barthelmess, who's about as French as a hot dog with mustard, plays the title character in the British costume melodrama Spy of Napoleon. Based on a novel by Baroness Orczy (The Scarlet Pimpernel), the plot focuses on the animosity between Napoleon III (Frank Vosper) and Prussian chancellor Bismarck (Lyn Harding). Certain that he is surrounded by traitors (which indeed he is), Napoleon dispatches his illegitimate daughter Eloise (Dolly Haas) to flush out the turncoats. It happens that the girl is married to exiled French patriot Gerald de Lanoy (Barthelmess), who though he despises Napoleon loves his country and agrees to help her in her mission. Francis L. Sullivan wins the acting honors as the Emperor's sinister chief of police Toulon. ~ Hal Erickson, Rovi

George Merritt
as The Prussian Consul

Critic Reviews for Spy of Napoleon

Brings Richard Barthelmess back to the screen in a rather dull and mediocre historical film.

There are no featured reviews for Spy of Napoleon at this time.