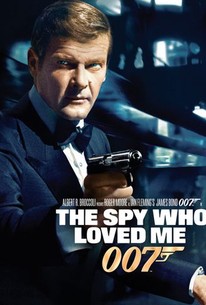 Critics Consensus: Though it hints at the absurdity to come in later installments, The Spy Who Loved Me's sleek style, menacing villains, and sly wit make it the best of the Roger Moore era.

Critics Consensus: Though it hints at the absurdity to come in later installments, The Spy Who Loved Me's sleek style, menacing villains, and sly wit make it the best of the Roger Moore era.

Critic Consensus: Though it hints at the absurdity to come in later installments, The Spy Who Loved Me's sleek style, menacing villains, and sly wit make it the best of the Roger Moore era.

The Spy Who Loved Me Photos

Roger Moore as agent 007 teams up with a beautiful Soviet agent (Barbara Bach) to battle Stromberg (Curt Jurgens) in order to save the world from total annihilation and a 315-pound villain, "Jaws" (Richard Kiel).

Geoffrey Keen
as Minister Of Defense

Yasher Adem
as Stromberg One Crewman

George Roubicek
as Stromberg One Captain

Irvin Allen
as Stromberg One Crewman

Peter Ensor
as Stromberg One Crewman

Desmond Llewelyn
as Q
View All

News & Interviews for The Spy Who Loved Me

View All The Spy Who Loved Me News

Critic Reviews for The Spy Who Loved Me

[The Spy Who Loved Me] gets off to a promising start but proves seriously deficient in staying power.

Never did top that first stunt.

It may not be Fleming but it is terrific fun.

The ostensible hero is just a fleshy blur.

As always, story and plastic character are in the service of comic strip parody.

The film has its moments -- Kiel's indestructible heavy racks up a good score -- but the rest is desperately weak.

The Spy Who Loved Me, the latest in the series, gets as silly as some of its inferior predecessors. Yet it features an adversary as memorable as any since Goldfinger and Dr. No -- a magnate named Stromberg.

An outstanding entry in the 007 franchise.

If Roger Moore wasn't the best James Bond, he was at least the most honest.

The Spy Who Loved Me re-establishes the greatness of the Bond franchise. It's the biggest and most boldly produced feature as of yet, offering bountiful thrills and fun in equal measure.

On his tenth adventure, 007 is finally where he needs to be - in an entertaining movie deserving of his iconic image.

The Spy Who Loved Me represents a new found energy for the franchise that was struggling for definition in the new decade. With amazing stunts and iconic moments, it's hard not to love this film.

Audience Reviews for The Spy Who Loved Me

Roger Moore has come out of the trenches and become the next "James Bond!" The previous two entires into the Bond franchise were very fun films, but the jokes and cheesiness was a bit too much for the character, leaving his films in the dust, behind the great Connery. I must say, this is one of the best Bond films in the franchise yet. The story is well played out and the villains are very fun to watch, especially the villain whom I like to call the Indestructible Man. The action scenes are terrific, well paced, and smart. The dialogue is actually a step above the rest, and the editing, which was done by the worst editor of the series, has defintiely redeemed his title here. I had an absolute blast watching "The Spy Who Loved Me!"

definitely one of the better roger moore entries. bach was great, and jaws is one of my favorite bond villains. the story had its moments where it just got silly, but the plot was entertaining and the locations were great. the film has some classic bond moments.

Roger Moore's third outing is not only one his best, nut one of the best in the entire series. The plot is the typical Cold War global domination scheme wherein we get megalomaniac anarchist Stromberg threatening New York and Moscow with nukes. The broad plot isn't what's great though, rather the way steps leading up to it, featuring lots of globetrotting, and Bond teaming up with a sexy Russian agent who holds her own against him. Plus, we get a cool car/submarine, and the first of two appearances by Jaws, a behemoth of a henchman with a set of metal teeth. He's awesome. There's several good action scenes, and a little, but surprisingly not much goofiness. Well, there is the "Lawrence of Arabia moment" which is odd, hilarious, and totally awesome. Marvin Hamlisch provides a great score, Carly Simon's theme is decent, and the film has the typical grandeur we've come to expect from the series. Yeah, the plot could be a little more original, and the pacing could be tightened here and there, but Moore holds it all together, and he gets tremendous support from Barbara Bach as his female counterpart, Richard Kiel as Jaws, and Curt Jurgens as Stromberg. All in all, this is a terrific film that you really shouldn't miss.

A dynamic and sensational action-thriller. A bold, fun and compelling Bond film that has two main leads instead of one. Roger Moore and the breathtaking Barbra Bach are irresistible together, they have great chemistry together, they combine the action and romance perfectly. Richard Kiel is a force of nature, making the action sequences involving him and Moore just more exciting and awesome to watch. A dazzling adventure that shows no one really does it better than Bond. Bravo stuff Sir. Roger Moore.

The Spy Who Loved Me Quotes