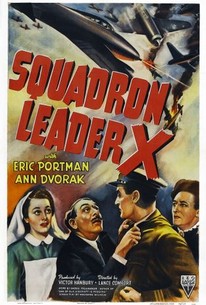 Erich Kohler (Eric Portman) is a decorated Luftwaffe pilot recruited for a daring propaganda mission in Belgium -- to drop bombs on a civilian target in Ghent and then parachute out wearing an British Royal Air Force uniform and, once on the ground, spread the story that the RAF is attacking civilian targets in the Nazi-occupied nation. Kohler, a dedicated Nazi who was educated in England and speaks unaccented English, is perfectly prepared to carry out his orders, but his mission goes awry when he immediately gets "rescued" by the Belgian underground, and put in with a group of real British flyers who are being returned to their homeland that very night. Now, with his life at risk, he must hide his real identity and fall in with them, going along for the trip to England. Once there, he tries to re-establish contact with people he knew who were sympathetic to Hitler, but discovers that those German emigres whom he could trust most are being interned. He looks up an old girlfriend (Ann Dvorak), who had some sympathy for the Hitler government, only to discover that he has begun thinking a lot more clearly about the Nazis, and for a time takes shelter with an emigre couple (Martin Miller, Beatrice Varley) whose cooperation is a result of coercion. But he needs more than shelter -- Kohler is already fearful of being caught by British intelligence, but soon learns that the German agents operating in England have orders to kill him, as well. Having failed in his mission, he is, at best, an embarrassment to the German nation, and a liability. He has no choice but to make the best escape he can, the way he knows best, into the air, and the safe neutral territory of Ireland. ~ Bruce Eder, Rovi

Aubrey Mallalieu
as Pierre
View All

While the photography of the picture is far from satisfactory, there are several excellent dramatic scenes.

Restrained acting, notably by Martin Miller, maintains an air of plausibility wherever the script permits.

Squadron Leader X has a good idea behind it. Too leisurely presentation of the thinly-spun plot, however, cripples the picture's holding powers.

A very workmanlike job on which time and money must have been lavishly expended, intelligently cast, directed and photographed.

The film gets off to an absorbing start. But it fails to live up to its promise because its creators didn't know when to cry "Halt!"

Martin Miller is exceptionally good In the supporting cast.

[Eric Portman] presents a cad and a coward who is no use to anybody, even his to own people. This tough job, which breaks down the sportsman's instinctive sympathy for a hunted man, is... a remarkable asset to the success of the film.

Surprise film of the season, this British melodrama tells of a Nazi air-ace's adventures in wartime London with originality, excitement, and hard, brilliant factual production.

An exciting story, well scripted and produced with tremendous attention to detail. The direction is admirable, the pace deftly adjusted and the photography and lighting noticeably good.

Its story is -- despite fictional errors -- a gripping one, [and] it has a fine atmosphere of suspense and misty drama, some grand characterizations, and a topline performance by an increasingly popular British star -- Eric Portman.

There is no lag in continuity or realism in the Emeric Pressburger story.

There are no featured reviews for Squadron Leader X at this time.