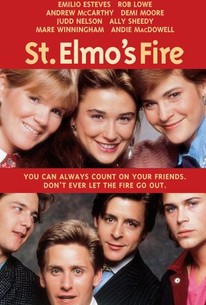 Critics Consensus: St. Elmo's Fire is almost peak Brat Pack: it's got the cast, the fashion, and the music, but the characters are too frequently unlikable.

Critics Consensus: St. Elmo's Fire is almost peak Brat Pack: it's got the cast, the fashion, and the music, but the characters are too frequently unlikable.

Critic Consensus: St. Elmo's Fire is almost peak Brat Pack: it's got the cast, the fashion, and the music, but the characters are too frequently unlikable.

Featuring an ensemble full of beautiful and talented young actors, this comedy drama centers an a septet of Georgetown graduates who fret about their futures.

Bennet Bowman
as The New Breed Member
View All

These aren't characters -- they're character hooks.

All speed and stylishness without a bit of emotional resonance beneath.

There is an abundance of astute and knowledgeably drawn scenes with this contextually structured story. There are some biting observations of college life, with law school in particular taking some verbal jabs on the chin.

St. Elmo's Fire is all about a group of recent college graduates in Washington who were always the best of friends but now are drifting apart as real life approaches, discovering various reasons why they are so individually obnoxious.

Estevez and Nelson are as unappealing here as in The Breakfast Club, though in fairness they're hampered by a script that seems to despise its characters.

...St Elmo's Fire is self-absorbed and dull, just like the characters that it depicts. But it's also something of a hoot to see 80's idiocy laid bare like this...

...familiar territory that is, for the most part, employed to underwhelming effect...

Savaged when it was released, is it time for a reconsidering St. Elmo's Fire, a retrograde look at '80s single life? No. No, it's not.

I disliked all the characters and whatever magic John Hughes had, where he could make me root for characters I disliked doing things I detested, this movie hasn't got.

It's not until the strains begin to show and rivalries emerge that St. Elmo's Fire becomes truly interesting -- and convincing.

From the music to the iffy fashions, director Joel Schumacher and his cast capture the 80s in one supercool microcosm.

Not one I grew up with, but I have come to appreciate this later in life. A not so great 80's drama still beats most of the new ones, and I do like a lot of the cast, particularly Andrew McCarthy. I think the brat pack stuff put me off when this was popular, but it does have a bit of depth to it.

It plays like a rejected backdoor pilot for a coming-of-age prime time TV drama series, with not very interesting storylines despite the good acting - and it does not help a bit that the characters and their personal conflicts don't get enough individual screen time to fully grow on us.

It's really quite enjoyable - the humor, the drama - but it just doesn't make much sense to me. All these friends have such disparate personalities that there's no way they would all hang out and remain friends after college - and that's not even speaking of Wendy's completely baseless infatuation for Billy. My friend pointed out that my own circle of friends have vastly different characters, but we coexist because we've had the benefit of hanging out a lot in real life. The St. Elmo's gang are never shown "just hanging out." They're always doing something, getting into trouble, plotting grand gestures - all these huge moments of which culminates in an overwrought, melodramatic climax that of course brings them all together. The explanation of the title also doesn't hold much water.

You can always count on your friends. Don't ever let the fire go out. Very good movie from the 80's! The music from this movie is phenomenal. I think the reason I love this movie despite all its flaws is it makes me put my life in perspective and think about the friends and decisions I have made. Every time I hear the love theme I can't help but feel sentimental. Admire what it wants to say. Take it for what it is. I really enjoyed what this film was about. And it made me feel a bit better about life, after all, we're all going through St. Elmo's Fire. Go see it! Seven friends - Alec, Billy, Jules, Kevin, Kirby, Leslie and Wendy - are trying to navigate through life and their friendships following college graduation. Alec, who aspires to political life, has just shown his true colors by changing his allegiance from Democrat to Republican, which freaks out girlfriend Leslie, who he wants to marry. Budding architect Leslie, on the other hand, has an independent streak. She believes she has to make a name for herself to find out who she is before she can truly commit to another person in marriage. But Leslie and Alec have decided to live together. Because Leslie refuses to marry Alec, he believes that justifies certain behavior. Kirby, who wants to become a lawyer and who pays for his schooling by working as a waiter at their local hangout called St. Elmo's Bar, and struggling writer Kevin are currently roommates. They are on opposite extremes of the romance spectrum. Kirby has just reconnected with Dale Biberman, a slightly older woman he knew in college who is now a doctor. He is madly in love with her and will do *anything* to impress her. Kevin, on the other hand, doesn't date and states he doesn't believe in love, making his friends speculate that he's a closet homosexual who is secretly in love with Alec. Kevin will eventually open himself up to the one friend who matters the most. Billy, married with a child, is the irresponsible one of the group who would rather sleep around and play the saxophone than face the realities of being an adult with family commitments. He still lives for the memory of his fraternity glory days. Virginal and sheltered Wendy, who comes from a wealthy family, works in a low paying social services job. Her family provides for all her financial needs. She is in love with Billy, who in turn takes advantage of her adoration of him. And most are concerned about Jules, who works in a bank, lives a life of excess in all facets and doesn't have the financial means to live that lifestyle. The question for all seven becomes whether their friendship can survive adult real life.