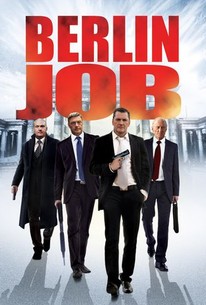 A crime thriller follows the story of infamous gangster cousins Micky Mannock and Ray Collishaw. Having long since graduated from the terraces they now run the top firm in London. But when they lose a drug shipment belonging to the Russian Mafia, a turf war threatens to tear their empire apart.

Zlatko Buric
as Vladimir
View All

This whole caper is about as gritty as a babywipe.

The script becomes clumsier and cornier as it goes on, and Harper's direction, while competent, lacks the skill to disguise his many attempts to wrongfoot the viewer.

A fairly unremarkable crime caper that boasts production value and an impressive cast but is hampered by a sub-par script.

The film looks good, thanks to cinematographer Mike Southon's stylish camerawork, but the script is well dodgy.

Totally over-narrated to the point of sheer boredom and the predictable shoot-out is so unconvincing it could have seen the film renamed Reservoir Dregs.

Not even the formidable presence of Charles Dance can salvage a script this woeful.

More like being nuzzled by a bulldog than mauled by one.

Even the presence of Charles Dance as a gentleman crook with connections to Scotland Yard can't hide the fact that the film is all style and no class.

Directed by Frank Harper, well known for some tough guy roles in a few violent British crime flicks so you can bet your bottom dollar what this is about. I will refrain from using cockney slang in this review if I can. So its a British crime/mob flick (did you see that coming?) about a couple of cousins who screw up a drug shipment for the sadistic Russian mafia. Sounds like it could be an awesome, nasty, beat em' up type thriller right, well I don't wanna disappoint you but.... The problem is this type of film is sooooo damn predictable and over done, we all know there is gonna be double cross and twists, the only question is who. But at the end of the day its obviously usually down to a couple characters, its not exactly hard to guess. The other problem is the film is rather dull actually, I half expected a really good bust up as with other British gritty crime flicks, but this is sorely lacking that punch. The characters are the usual stereotypical cockney loudmouths, nutters, hard men and smooth talkers, the whole obligatory range of underworld fellas, oh and there are pikeys in there again too. The only difference here is the fact the main characters are much more slick and well off, rather than being grimy pub dwelling football thugs...although there is that element just in case you miss it. I wouldn't say the acting is terrible, its good enough for the job in hand, plus Charles Dance and Vincent Regan add some class. The rest are almost the same flippin cast from previous cockney crime flicks! I dunno why they just don't use the cast of 'EastEnders' and be done with it. The main trouble is nothing really happens, there is nothing to really boast about here, no action, not much fighting, no sex, just the odd murder, not even much girly action! blimey guv!!. I like the films title and I think this had some promise but end of the day its no different from all the other British crime thrillers, accept this has no action. Generic, cliched and really a bit pony, this type of film has had its day, but I'm always up for a good bit of footie hooligan action...in the silver screen sense I mean.