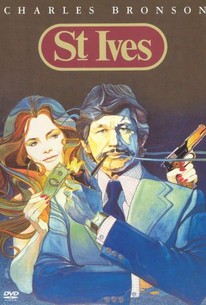 Ex-crime reporter turned novelist Raymond St. Ives (Charles Bronson) is drawn back into the world of his former profession by wealthy Abner Procane (John Houseman). St. Ives is hired to locate a stolen set of ledgers that, if made public, could trigger an all-out mob war. Amazingly, St. Ives fails to recognize who his real friends and enemies are in the course of his investigation, and it takes all his mental and physical resources to keep from being exterminated. One of the characters who isn't all that she seems is sexy Janet Whistler (Jacqueline Bisset). While the "main" cast is serviceable, the lineup of future stars in minor roles (Daniel J. Travanti, Jeff Goldblum, Robert Englund, Michael Lerner) is fascinating. Based on The Procane Chronicle, a novel by Oliver Bleeck.

Joseph DeNicola
as No Nose

Rosalyn Marshall
as Girl at Table

Ed Cross
as Orderly
View All

St. Ives is an ambitious Charles Bronson picture that looks good but finally doesn't quite work.

It's all very slick, entertaining and undemanding.

This movie is so bad that when the convoluted action takes us to a drive-in movie the same film clips can be glimpsed four times...

Chinatown reworking in modern clothes, at least modern when the film was made, is an okay film but the original is superior in every department.