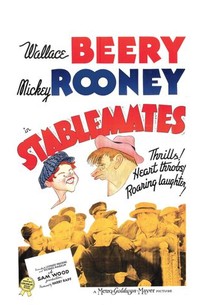 Stablemates is a typically treacly vehicle for Wallace Beery, who goes through his usual slobbery paces as an eternally inebriated ex-veterinarian named Tom Terry. Aspiring jockey Mickey (Mickey Rooney) idolizes Tom, who reciprocates by passing along horsemanship advice to the boy. The film's dramatic high point is the scene in which Tom, his judgement benumbed by years of alcohol abuse, tries to pull himself long enough to perform a delicate operation on Mickey's beloved horse Lady-Q. It goes without saying perhaps that the film culminates in the standard Big Race, with Mickey and Tom pinning their hopes on the obligatory "long shot." Just as Mickey Rooney has replaced Jackie Cooper as Beery's juvenile costar in Stablemates, so too has Margaret Hamilton supplanted the late Marie Dressler as Beery's romantic sparring partner. ~ Hal Erickson, Rovi

Broken down to essentials, the plot is pretty mushy. In actual performance the comedy of Wallace Berry and Mickey's histrionics hide this fact pretty well.

Most movie-goers will agree... that this is Mickey's best picture I to date.

There are no featured reviews for Stablemates at this time.