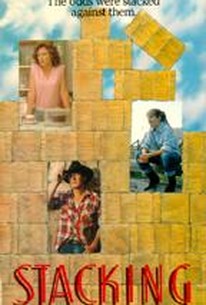 Stacking stars Megan Follows as a Montana teenager struggling to keep her family's farm together. The time is the 1950s, when rural 14-year-olds were supposed to be seen and not heard. But Follows intends to be seen and heard, and in so doing finds several strong adult allies. The film has been unfavorably compared to the strikingly similar theatrical feature Desert Bloom; while it's true that this takes forever to get started, it is saved by the powerful performances of Follows, Frederic Forrest, Christine Lahti, Peter Coyote and James Gammon. Completed in 1987, Stacking (the title refers to the bundling of crops) received its widest exposure when it aired February 15, 1989, over PBS' American Playhouse.

Anything of any import seems to happen offscreen in this movie. Its opening scenes are particularly tentative; you'll feels as if you've walked into the middle of the movie.

Touching drama about how the dreams of a mother and a daughter take them in very different directions.

Christine Lahti is great as always but the film is slow and depressing.