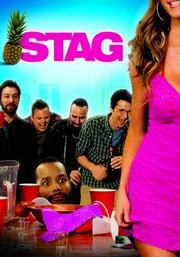 Ed C
November 15, 2013
I would not recommend this film to any one for any reason.

Ken has quite a tradition of pranking his friends savagely at their stag parties. Now that Ken is getting married to Caroline, he's justly apprehensive about payback time.

Ken recounts some of the episodes, and Caroline starts to wonder about him.

Ken's friends are loading up on their own angst and anger (much due to Ken) before the party.

The setup for the stag party has many threads. Carl, the enormous screw-up, is to help protect Ken, but Carl has locked himself into an elevator prop. Luke is asked to pickup the stripper from work, but he's recognized by an old friend, and has to lie his way through it. Henry gets kicked out (that afternoon) of his own place by his girlfriend, whose already picked out someone else. So Henry is in a really good mood.

Boredom factor is high. If I wanted long periods of irrelevant and not funny conversations, I would have sprung for a ticket to a third tier amateur theatre.

Ah, the stripper is just a fake, a blogger profiling them for their descent from manhood into drone-hood, or 'manopause'. Nice. Fits the rest of the film. Like everything else here, the film is flaccid and ineffective. The payback is an evening's boredom. Even the stripper's ever-so-short performance is turned into cold oatmeal. The only person who makes any traction is Carl, the most singularly useless character in the film.

Will anything come out of this stag party?

Acting: 4/10 Hm, hire actors next time, and a better screenwriter.

Screenplay: 4/10 Written by someone who hates viewers.

Domenic D
½ September 5, 2013
There have been a ton of bachelor party themed movies over the years with The Hangover series and Bachelor Party being the most popular, but more often than not they miss the mark.

Movies like the `The Hangover` usually have no rules and push the boundaries in all areas. Here they played it safe for the most part and felt more like aspects of a TV movie as opposed to a real stag party. They were going for a more character ensemble comedy which is fine, but this setting kind of got thrown to the back burner instead of being the focus. Every time things seem to be getting going on the party side some story aspect interrupts it and leaves you hanging. There are some funny moments, but there are also some more drama-esque aspects that felt a bit out of place.

For those expecting a hardcore bachelor party you will be sorely disappointed. There is only one piece of nudity and it is pretty quick and the hijinks are pretty tame. 3/10,