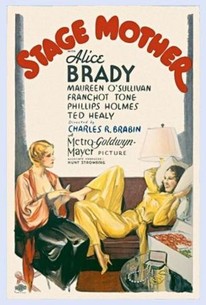 After the death of her circus-aerialist husband, Kitty Lorraine (Alice Brady) dedicates herself to transforming her daughter Shirley (Maureen O'Sullivan) into a celebrity. Kitty is so determined that Shirley will hit the "big time" that she continues to issue instructions to the girl even while undergoing an emergency appendectomy. Artist Warren Foster (Franchot Tone) upsets Kitty's plans by falling in love with Shirley, so mom plans to throw Foster off the scent by marrying her daughter off to titled nobleman Lord Aylesworth (Phillips Holmes). Finally realizing that she may be loving her girl to death, Kitty reunites Shirley with ever-patient Warren. A blend of themes previously explored by such dramas as Applause and Stella Dallas, Stage Mother was the film that introduced the syrupy ballad Beautiful Girl, later showcased (and gently mocked) in Singin' in the Rain. The film's best scenes are Alice Brady's verbal duels with her brash business partner Ted Healy -- and incidentally, one of Healy's stooges, the inimitable Larry Fine, shows up in a one-line bit.

There are no critic reviews yet for Stage Mother. Keep checking Rotten Tomatoes for updates!

There are no featured reviews for Stage Mother at this time.