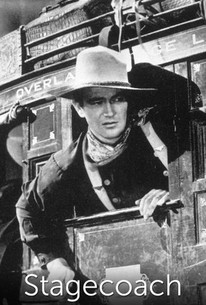 Outbound from a small town recently besieged by Indians, a stagecoach carries several diverse characters. They include rummy sawbones Josiah Boone (Bing Crosby), dance-hall girl and prostitute Dallas (Ann-Margret), embezzling bank clerk Gatewood (Robert Cummings), pregnant army officer's wife Lucy Mallory (Stefanie Powers), policeman Curly (Van Heflin), and several others. En route, the drunken Doc Boone is forced to sober up and deliver Lucy's baby, and the travelers are joined by Ringo (Alex Cord), an outlaw falsely accused of killing his own father and brother. Despite being arrested by Curly, Ringo helps fight off Indians and falls for Dallas. Once the coach reaches its destination, Luke Plummer (Keenan Wynn) and his two sons, the real killers of Ringo's family, shoot Gatewood for his stolen loot and wound Curly. A showdown between the Plummers and Ringo is inevitable. Famed painter Norman Rockwell, who rendered cast portraits for the film's closing credits sequence, appears in a brief cameo.

It falls short in offering something worth mentioning, already by a script that does not surprise even when it is supposed to. [Full Review in Spanish]

There are no featured audience reviews yet. Click the link below to see what others say about Stagecoach!