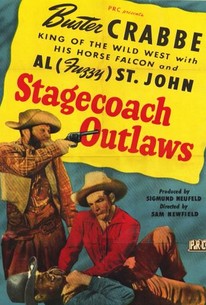 At long last, a low-budget Western that fully lives up to its title, Stagecoach Outlaws depicts exactly that, a gang of outlaws robbing a stage line operated by Jed Bowen (Edward Cassidy). When Billy Carson (Buster Crabbe) foils the gang's latest holdup, its leader, Steve Kirby (I. Stanford Jolley), arranges to have the notorious outlaw Matt Brawley (Robert Kortman) sprung from jail. Unfortunately for Kirby, his henchmen instead release Fuzzy Q. Jones (Al St. John), whose stupidity had landed him behind bars. Before he has time to explain, Fuzzy is assigned to kill Billy and then the real Matt Brawley turns up. After a series of bruising fistfights in a ghost town hotel, the gang is finally rounded up and carted off to jail.

I. Stanford Jolley
as Steve

There are no critic reviews yet for Stagecoach Outlaws. Keep checking Rotten Tomatoes for updates!

There are no featured reviews for Stagecoach Outlaws at this time.