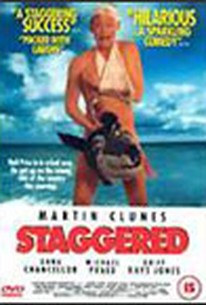 This British romantic comedy from director and star Martin Clunes concerns Neil Price (Clunes), a meek toy demonstrator who becomes engaged to Hilary (Sarah Winman), a beautiful girl from a prosperous family. At his wild bachelor party, Neil consumes a spiked drink and passes out. When he awakens, he is nude on a Scottish island beach, with only three days to make it back to London in time for his wedding. Along the route, Neil has a series of adventures and meets a variety of eccentric characters, including a sexually-depraved Welsh salesman, Graham (Griff Rhys Jones). and a medical researcher, Carmen Svennipeg (Anna Chancellor), who assists Neil in his quest to get back home. Back in London, however, it unfolds that Neil's best friend Gary (Michael Praed) is the party responsible for slipping Neil the drugged elixir and depositing the poor groom on the remote beach. It seems that Gary has designs on Hilary and her money, and he's got three days to make his plan work. ~ Karl Williams, Rovi

Clunes, jug-eared and thick-lipped, looks as if he might be funny, but isn't. Griff Rhys Jones, as a Welsh travelling salesman and rampant swinger, is, but not for long enough.

There are no featured reviews for Staggered (Mad Wedding) at this time.