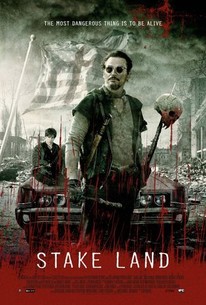 Critics Consensus: Though the genre is well worn at this point, director Jim Mickle focuses on strong characterization and eerie atmosphere to craft an effective apocalyptic vampire chiller that also manages to pack a mean punch.

Critics Consensus: Though the genre is well worn at this point, director Jim Mickle focuses on strong characterization and eerie atmosphere to craft an effective apocalyptic vampire chiller that also manages to pack a mean punch.

Critic Consensus: Though the genre is well worn at this point, director Jim Mickle focuses on strong characterization and eerie atmosphere to craft an effective apocalyptic vampire chiller that also manages to pack a mean punch.

America is a lost nation. When an epidemic of vampirism strikes, humans find themselves on the run from vicious, feral beasts. Cities are tombs and survivors cling together in rural pockets, fearful of nightfall. When his family is slaughtered, young Martin ("Gossip Girl's" Connor Paolo) is taken under the wing of a grizzled, wayward hunter (Nick Damici) whose new prey is the Undead. Simply known as Mister, the vampire stalker takes Martin on a journey through the locked-down towns of America's heartland, searching for a better place while taking down any bloodsuckers that cross their path. Along the way they recruit fellow travellers, including a nun (Kelly McGillis) who is caught in a crisis of faith when her followers turn into ravenous beasts. This ragtag family unit cautiously moves north, avoiding major thoroughfares that have been seized by The Brethren, a fundamentalist militia headed by Jebedia Loven (Michael Cerveris) that interprets the plague as the Lord's work. Director Jim Mickle first grabbed the attention of horror film fans with his zombie-rat thriller Mulberry Street, in which Damici also starred and served as co-writer. They have teamed up again to deliver an even darker and bloodier shocker. Drawing on the post-apocalyptic frenzy described by Richard Matheson (author of the novel I Am Legend) and George Romero, STAKE LAND is a road movie with fangs and a phantasmagorical journey. Also starring horror movie icon Danielle Harris and produced by indie horror director Larry Fessenden (THE LAST WINTER). -- (C) IFC Films

Stuart Rudin
as Pops the Barber

50 Fresh Scary Movies and TV Shows to Watch on Netflix
Critics Consensus: Water for Elephants Is A Little Soapy

Mickle's observation of a devastated working-class America is so sharp that the horror elements, though effectively handled, come to feel like an afterthought.

Like Romero, Mickle has a pragmatic attitude to genre convention: even the corniest stereotypes can be turned to new purposes.

Somehow its posse of American travellers, attempting to reach the Eden of Canada while assailed by vampires, seems a little dull.

The postapocalyptic landscape has become so familiar of late (The Road, The Book of Eli) it puts pressure on low-budget indies like this to deliver something new.

An angsty, bleak fantasy of America the lost.

Other undead movies needlessly foreground the action. "Stake Land'' has its fight scenes, but here they're secondary.

The pace is deliberately measured, with time to spare for the orphan hero's elegiac voiceover narration. When the action comes, however, it does so in savage and bloody bursts.

Don't misunderstand -- if you want to follow a few tough folks battling their way through a monster-infested world, Stake Land delivers. It just could have been thought out more thoroughly.

Essentially a far-better-than-average B-movie, slick in presentation and able to keep up a steady pace.

This landscape, although dressed in the trappings of genre, is a thinly veiled exaggeration of America's current, divisive culture wars, with Mickle and Damici leaving little doubt as to where they themselves stand or what is at stake for humanity.

This is no gallows comedy, it's a survival drama in the mode of The Walking Dead. It has more in common with The Road or George Romero's late Dead films than most vampire films...

Stake Land is intelligently rendered horror. It's a cut above more recent efforts, being an accomplished and thoughtful piece of work and an overall, enjoyable watch.

Alan Diment
We Got This Covered
View All Critic Reviews (66)

"Stake Land" is "The Walking Dead", but with vampires. Unfortunately, that also means it's a bit slow at times. However, for a low budget film (which I assume this MUST be) in the action/horror genre, the film makers have done an exceptional job. "Stake Land" is exciting and thoughtful with reasonably solid character development. (Too bad they didn't spend a little of those creative juices on the title.)

Starts brilliantly, but fails to live up to the scene it sets in the first 5 mins. More post apocalypse than vampire movie. Decent enough to be better than most of the crap out there.

A very brutal, dark, depressing movie with a great cast...more of a drama with plenty of scares, and gore, thrown in. I expected this to be cheesy, low budget zombie/vampire apocalyptic film. Instead, it turned out to be a well acted, tightly written film. This movie isn't for someone looking for cheap horror thrills. This one definitely has a deeper, slower moving vibe....