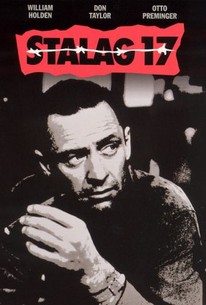 Critics Consensus: Stalag 17 survives the jump from stage to screen with flying colors, thanks to Billy Wilder's typically sterling direction and a darkly funny script.

Critics Consensus: Stalag 17 survives the jump from stage to screen with flying colors, thanks to Billy Wilder's typically sterling direction and a darkly funny script.

Critic Consensus: Stalag 17 survives the jump from stage to screen with flying colors, thanks to Billy Wilder's typically sterling direction and a darkly funny script.

The scene is a German POW camp, sometime during the mid-1940s. Stalag 17, exclusively populated by American sergeants, is overseen by sadistic commandant Oberst Von Schernbach (Otto Preminger) and the deceptively avuncular sergeant Schultz (Sig Ruman). The inmates spend their waking hours circumventing the boredom of prison life; at night, they attempt to arrange escapes. When two of the escapees, Johnson and Manfredi, are shot down like dogs by the Nazi guards, Stalag 17's resident wiseguy Sefton (William Holden) callously collects the bets he'd placed concerning the fugitives' success. No doubt about it: there's a security leak in the barracks, and everybody suspects the enterprising Sefton -- who manages to obtain all the creature comforts he wants -- of being a Nazi infiltrator. Things get particularly dicey when Lt. Dunbar (Don Taylor), temporarily billetted in Stalag 17 before being transferred to an officer's camp, tells his new bunkmates that he was responsible for the destruction of a German ammunition train. Sure enough, this information is leaked to the Commandant, and Dunbar is subjected to a brutal interrogation. Certain by now that Sefton is the "mole", the other inmates beat him to a pulp. But Sefton soon learns who the real spy is, and reveals that information on the night of Dunbar's planned escape. Despite the seriousness of the situation, Stalag 17 is as much comedy as wartime melodrama, with most of the laughs provided by Robert Strauss as the Betty Grable-obsessed "Animal" and Harvey Lembeck as Stosh's best buddy Harry. Other standouts in the all-male cast include Richard Erdman as prisoner spokesman Hoffy, Neville Brand as the scruffy Duke, Peter Graves as blonde-haired, blue-eyed "all American boy" Price, Gil Stratton as Sefton's sidekick Cookie (who also narrates the film) and Robinson Stone as the catatonic, shell-shocked Joey. Writer/producer/director Billy Wilder and coscenarist Edmund Blum remained faithful to the plot and mood the Donald Bevan/Edmund Trzcinski stage play Stalag 17, while changing virtually every line of dialogue-all to the better, as it turned out (Trzcinski, who like Bevan based the play on his own experiences as a POW, appears in the film as the ingenuous prisoner who "really believes" his wife's story about the baby abandoned on her doorstep). William Holden won an Academy Award for his hard-bitten portrayal of Sefton, which despite a hokey "I'm really a swell guy after all" gesture near the end of the film still retains its bite today. ~ Hal Erickson, Rovi

Bob Templeton
as Prisoners with Beard

Paul Salata
as Prisoners with Beard

Jerry Singer
as The Crutch

Bill Sheehan
as Prisoners of War

Warren Sortomme
as Prisoners of War

Robin Morse
as Prisoners of War

Harry Reardon
as Prisoners of War

Wesley Ling
as Prisoners of War

John Mitchum
as Prisoners of War

William McLean
as Prisoners of War

Tommy Cook
as Prisoners of War

Peter Leeds
as Barracks No. 1 POW

Herbert Street
as Prisoner of War

Rodric Beckham
as Prisoner of War

Jerry Gerber
as Prisoner of War

William Mulcahy
as Prisoner of War

Russell Grower
as Prisoner of War

Cameron Donald
as Prisoner of War

Ralph Gaston
as Prisoner of War

John Patrick Veitch
as Prisoner of War
View All

As rowdily entertaining on the screen as it was on the stage.

Interesting depiction with a pretty decent performance from Holden and supported by a credible cast.

The resulting letdown is terrific, but along the way there is some of the funniest men-at-loose-ends interplay that Wilder has ever put on film.

One could make an argument that, among 20th century directors, few were more versatile than Billy Wilder.

A lusty comedy-melodrama, loaded with bold, masculine humor and as much of the original's uninhibited earthiness as good taste and the Production Code permit.

[Stalag 17 is] remarkably realized within the framework of an adaptation whose chief weakness, its over-theatricalization, is inherited, and as sympathetic a work in its intent as in its spirit.

Stalag 17 is a crude, cliché-ridden glimpse of a Nazi prison camp that I hated to see end.

Stalag 17 is too much of a comedy for a WWII-set film but sometimes, you just have to turn to humor in order to survive.

A raucous, cynical but compelling comedy-drama about the life led by American soldiers in a German prison camp in 1944. Not recommended for the kiddies.

Simultaneously fiery and farcical, it's a fitting final third for Wilder's 1950s hat trick that also includes Sunset Blvd and Ace in the Hole

A spectacular prison camp drama that relies on an intriguing, compelling mystery while also being quite funny and touching when showing the camaraderie between the prisoners of Barrack 4, with numerous memorable scenes that make it an unmissable classic.

A group of American POWs discovers that there is an informant in their midst. Kind of a war movie lite, Stalag 17 is more entertaining than moving and more delightful than most war films typically are. William Holden's characteristic insouciance fits right in, and the rest of the cast basically follows suit. Once one gives in to the film's tone, it becomes worth watching, even if the reveal comes too early, diffusing most of the potential suspense. Overall, this is a strong, entertaining, genre-defying film, but it's not perfect.

When a self-serving operator in a WWII prison camp is suspected of collaboration with the enemy, he is forced to uncover the true culprit. Another of Billy Wilder's cynical classics, there is a lot more humour in the material than you would think. In fact it is often so broad it can resemble an extended episode of Sgt. Bilko, full of fast paced wise-cracking and army camaraderie. It is Holden's character of course that provides the real drama, and he plays it pitch perfectly. Unlike most prisoner of war films that are full of stiff upper lipped heroics, his cynical attitude never wavers and the sharp, witty dialogue makes for some fine black comedy. Easily one of the best examples of the genre.

A bit silly for WIlder, but overall a great film. Also, Preminger as the Nazi guard...doesn't get much better