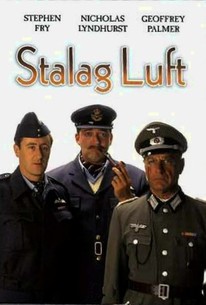 The winner of the Ivor Novello Award for Television Theme Music in 1994, director Adrian Shergold's spoof of wartime escape films tells the tale of a bumbling RAF Officer who plots the escape of 327 prisoners from a German POW camp. Few wartime prisoners have attempted escape quite as many times as RAF Officer James Forrester. Though Officer Forrester has twenty-three escape attempts to his name, each successive attempt he makes to break free somehow seems to go worse than the last. But this time there's a difference, because Officer Forrester isn't just plotting his own escape, but the escape of all 327 of his fellow prisoners as well - and all at once to boot. ~ Jason Buchanan, Rovi

There are no critic reviews yet for Stalag Luft. Keep checking Rotten Tomatoes for updates!

There are no featured reviews for Stalag Luft at this time.