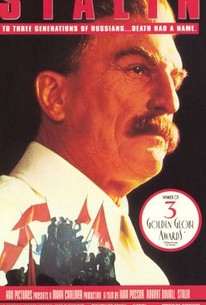 The made-for-cable film Stalin relates the story of the ruthless Soviet dictator and his tyrannical rule. Robert Duvall gives an excellent performance as the dictator and the photography is beautiful, as are the sets, since much of the movie was shot on location in Russia. The screenplay also does a good job of detailing Stalin's aggression, not only on his citizens, but also his young wife (Julia Ormand). Nevertheless, the story is very detailed and viewers need to pay close attention in order to make the film a rewarding experience.

Duvall and Ormand are terrific in this effectively unnerving depiction of the murderous dictator.

There are no featured audience reviews yet. Click the link below to see what others say about Stalin!