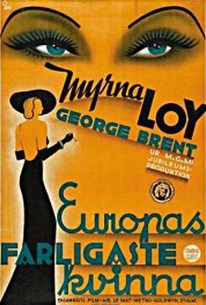 This film stars Myrna Loy as a seductive espionage agent, working on behalf of the Kaiser in 1915 Istanbul. American medical student George Brent crosses Loy's path, and the two fall in love. Divided between romance and duty, Loy opts for the latter and apparently causes Douglas' death.

Jamiel Hasson
as Aide
View All

This film tickled me. Myrna Loy plays the real-life Germany spy 'Fraulein Doktor' who is in Constantinople (aka Istanbul, aka Stamboul) during WWI, trying to snoop out who in the Turkish chain of command is selling information to the British. The prelude to sending her there may remind you a bit of 007 meeting M before a mission, minus the sophisticated gadgetry, but including the description of various codes and signals. It's clear early on that this film just made it in before the Hays Code began enforcement in 1934, as Loy takes a bath and dries with a towel that's a little too small, and we learn that part of her duties as a spy involve seducing those she wants information from. There's a great scene where she helps stop a traitor in their ranks who is delivering information via a false tooth that's hollowed out, and that's how the American (George Brent) gets involved in it all. Brent is charming and has some funny banter with her, but gets a little annoying in how aggressive and possessive he becomes when the two start falling for one another. I confess I would have been happier had she remained stronger and aloof. However, with that said, I loved how intricate the plot was, and the twists and turns along the way. With deception the order of the day, it's fun to watch all involved manipulate their way through situations, and as 'out there' as the premise is, the film has an authenticity to it, and feels ahead of its time. There are several cute scenes with Loy, who shows at least a little bit of an edge as well as a playful and loving side. Is she completely believable as a spy? Probably not, but she is fully engaging and a delight to watch. Lionel Atwill and C. Henry Gordon are also strong in the roles as the German chief of spies and Turkish high commander, respectively. The film's pace is right and Director Sam Wood includes some nice touches with his cuts, streets scenes, and even a brief exotic dancer. Herman J. Mankiewicz's screenplay is smart, and holds together. I may have given the film an even higher rating, as after its strong start and 'ok' middle, it had a number of fine moments down the stretch, but I have to say, I hated the ending, which was a shame. Overall though, it's hard to fathom the negative reviews and low average rating - this one is quite enjoyable.