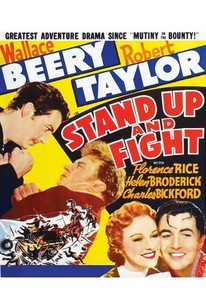 Stand Up and Fight Photos

Directed with customary haste by Woody Van Dyke, Stand Up and Fight is an excellent dual vehicle for veteran Wallace Beery and up-and-coming Robert Taylor. Set in the American west in the mid-19th century, the story concerns the efforts of empire-building Blake Cantrell (Taylor) to construct a railroad across the wide open spaces. Cantrell is faced with obstacles at every turn, none more obstreperous than stagecoach-line owner Captain Boss Starkey (Beery), The film traces Cantrell's progress from drunken roisterer to pioneering visionary, and Starkey's parallel transition from deadly foe to trusted friend. The villlain of the piece is slave-trader Arnold (Charles Bickford), who exploits his friendship with Starkey to Cantrell's disadvantage. Romance enters the picture in the form of Southern belle Susan Griffith (Florence Rice), who has almost nothing to do but look demure and lovely in a series of attractive period costumes.

Claire McDowell
as Woman
View All

Critic Reviews for Stand Up and Fight

A stirring account of the rivalry between early railroads and stagecoach lines for the nation's commerce of the 1850's.

There are no featured reviews for Stand Up and Fight at this time.

Stand Up and Fight Quotes