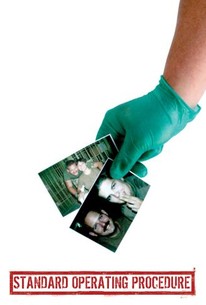 "Standard Operating Procedure" provides an examination of the unintended consequences of the Iraqi war with a focus on events at Abu Ghraib prison which began to appear in global media in 2004. The prison quickly became notorious for the shocking photos of the abuse and torture of terror suspects by military men and women. Ultimately, it is the story of soldiers who believed they were defending democracy but found themselves plunged into an unimagined nightmare.

The film's bloody dramatizations...suggest a fundamental distrust of the efficacy of the word over the image and a bland assumption that audiences have lost their ability to empathize.

For American military personnel to descend to Saddam's level was one of the worst moments in US history, and Morris's film reveals the truth: the poisonous Abu Ghraib pictures were not merely an American scandal but a human catastrophe.

In taking us beyond the edges of those infamous photographs, he shows us a system that did more than produce a few bad apples; it was rotten to the core.

Morris offers valuable new perspectives on Abu Ghraib, but the paying customers may not care to go there again.

The documentary and accompanying book contain a good deal of valuable and harrowing material.

Even the title of this nuanced and layered interrogation doesn't come into focus until the third act, as Oscar-winning doc-maker Errol Morris gets too close for comfort to the multiple deadly meanings behind the shocking pictures from Abu Ghraib prison.

Morris eschews sensationalist reporting to conduct a procedural investigation that wonders what the photos tell us about the morality of those commanding the American forces.

Both Morris's film and the book based on it by Gourevitch are devastating, even without going into detail about the complicity, or indeed responsibility, of top officials in the Bush administration.

Morris is more interested in the pictures she's in than in England herself. He didn't need her in person to make this film. Yet there she is, dragged in to redeem herself so she can be admitted into humankind.

Errol Morris' documentary... should be seen by all Americans but probably will viewed only by a relative handful.

"The fact that a person acted to pursuant to order of his government or of a superior does not relieve him from responsibility under international law, provided a moral choice was in fact possible to him." - Nuremburg Principle IV "Military intelligence is a contradiction in terms." - Groucho Marx Errol Morris turns his eyes from the top of the military command with Robert McNamara(currently burning in hell) in "The Fog of War" to those at the bottom with the riveting documentary "Standard Operating Procedure" about the documented abuses at Abu Ghraib prison in 2003. Per his usual style, he allows his subjects to tell their own story and possibly explain what they were thinking when they took the infamous photographs of abuses. My personal theory is that they were meant as souvenirs much in the same way that hunters would take photos of themselves with animals they killed. While expressing doubts in letters back home, Sabrina Harman said she took the photos as evidence while also appearing smiling in some of them. On one level, there was the standard operating procedure which consisted of bringing in Iraqi men of military age at random and softening them up for interrogation which included sleep deprivation.(The photograph of the prisoner standing on a box with his arms outstretched was part of procedure.) Even these procedures turned out to be useless in gathering useful intelligence. Then, there were actions which even the authorities thought went beyond this which included ritual sexual humiliation. A lot of this has to do with power, as the poorly trained and unsupervised soldiers as part of a herd mentality used it against those who could not defend themselves. The fact that they tried to hide what they did from their superiors proves that they thought they were doing something wrong. My only question: is how did the photographs get out? And one minor point: "Standard Operating Procedure" was distributed by Sony Pictures Classics. At one point, in the documentary two of the cameras are identified as being Sony. Since this might not have been necessary, there is a hint of product placement.

Errol Morris tries a different style in this one. The interviewees don't look straight into the camera (his signature shot), but it's also not a film about backwoods hillbillies or pet cemeteries. The subject matter is intriguing, and it's cool to get testimonies of the prison guards in trouble. Yes, I believe they got set up for failure, and as brainwashed military they were just doing what they were told to do. However, could they be any more STUPID to take all those pictures? I think not. Hmmm...let's give a thumbs up and smile while standing over the dead body of a guy we killed. Real classy.

Oh boy. I saw this one at the same time as Taxi to the Dark Side and they kind of morph into each other. Errol Morris as usual gives us some interesting visuals...but imagine if the two documentarians had collaborated on a much better join project?

Not easy to watch, but it is still one of the most important films of 2008. The film is tremendously engaging and educational. We only got a fraction of the story in the media, and Errol Morris' choice of just letting the soldiers that he could get to interview simply speak about their experiences in the prison gives it a whole new perspective. Morris, doesn't really take a stand about what happened other that the fact that the line between a "criminal act" or a "standard operating procedure" is not clear at all. Also, to say that this event was isolated to a few soldiers is a complete lie. There certainly were high ranking military officials responsible, whether directly or indirectly, and they have yet to answer for it.