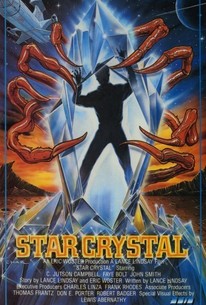 This sci-fi adventure concerns an interstellar crew who abandon an exploding space station for a small craft that has just made a trip to Mars. While on the red planet, the craft accidentally picks up an alien who possesses a crystal that is both a power supply and a computer. The alien starts knocking off the crew one by one, until a member of the crew discovers out how to communicate with it through the computer.

What saves Star Crystal is the third act, where it becomes so absurd that it moves the whole film from bad to so-bad-it's-a-must-watch for anyone who likes schlock sci-fi.

Seriously one of the worse sci-fi movies I've ever seen. The monster goes around killing everyone, and there's an average amount of blood, but then there's a twist to the story that just ruins the rest of it, making it the worst sci-fi movie of the 80s.