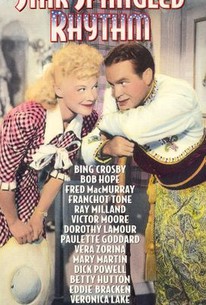 Star-Spangled Rhythm is a typical wartime all-star musical-comedy melange, this time from Paramount Pictures. The slender plot involves the efforts by humble studio doorman Pop Webster (Victor Moore) to pass himself off as a big-shot Paramount executive for the benefit of his sailor son Jimmy (Eddie Bracken). The overall level of humor can be summed up by the scene in which Webster is advised that the best way to pretend to be a studio big-shot is to say "It stinks!" to everything -- whereupon Cecil B. DeMille shows up to ask Webster's opinion about his current production. Betty Hutton, cast as studio switchboard operator and co-conspirator Polly Judson, is at her most rambunctiously appealing here. The huge lineup of guest performers includes Bing Crosby (and his 8-year-old son Gary!), Bob Hope, Veronica Lake, Dorothy Lamour, Dick Powell, Mary Martin, Alan Ladd, Fred MacMurray, William Bendix, Paulette Goddard, and Eddie "Rochester" Anderson, most (but not all) of them going through their characteristic paces. Highlights include a surrealistic rendition of That Old Black Magic with Johnnie Johnston and Vera Zorina; a frantic staging of the old George S. Kaufman sketch "If Men Played Cards as Women Do" with MacMurray, Ray Milland, Franchot Tone, and Lynn Overman; and The Sweater, the Sarong and the Peekaboo Bang, first performed by Goddard, Lamour and Lake, then lampooned in drag by Arthur Treacher, Sterling Holloway and Walter Catlett! PS: The actor playing Rochester's chauffeur in the Smart as a Tack number is John Ford "regular" Woody Strode. ~ Hal Erickson, Rovi

Macdonald Carey
as Louie the Lug

Bob Hope
as Master of Ceremonies

Gary Crosby
as Himself

Slim and Slam
as Themselves

Frank Moran
as Man with Sturges

Ralph Murphy
as Himself

Woody Strode
as "Smart As a Tack" Number

Bing Crosby
as Himself

Dorothy Lamour
as Herself

Veronica Lake
as Herself

Preston Sturges
as Himself

Cecil B. DeMille
as Himself

Pure corn but the wall scaling skit is hysterical.

Another movie from the forties which looks specifically made for the war effort. Like many others the skits, songs, and dance numbers take priority over the plot of the film. The cool thing is that they always have so many stars in these movies, so it's interesting to see what they will all do. It's an alright movie, but be prepared for lots of song and dance.