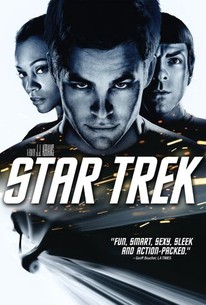 Amanda Foreman
as Hannity
View All

Aside from the cool effects and surprise cameos from notable actor/director Tyler Perry and one of the U.S.S. Enterprise's original passengers Leonard Nimoy, there really wasn't much there.

Whether watching Kirk and Sulu skydive from space, a rural Mid-West dotted with vast interstellar towers, or Kirk do battle with a very ill-tempered beastie on a frozen moon, it's hard not to gape in wonder.

I didn't go to this with much enthusiasm but, of course, it's been completely reinvented by J.J. Abrams and he's done a terrific job.

I'm no Trekkie, I don't speak Klingon, I've never boldly been anywhere in the least bit exciting -- my fear of motorways has always hampered me horribly in this respect -- and I don't like action epics but [Star Trek] is quite fun.

Did somebody just reach through the space-time continuum and pull out a white rabbit?

The plot itself is a mixture of complex alternate realities, supernovas, black holes, red matter, and science-fiction jargon, but the pacing is keen.

With a strong ensemble cast recreating beloved characters, Abrams gave us an origin story of the USS Enterprise.

So, J.J., accept our apologies? We're sorry for doubting you.

Without a whiff of calculated cynicism, Star Trek '09 gives the series a much-needed adrenaline injection, while retaining the heart and pathos which has defined it since the beginning.

There is the crackling relationship between a rakish, rebellious twenty-something Kirk and the clinically logical, yet emotional Vulcan-human Spock which keeps you glued to your seat. You can't seem to get enough of their dushmani-dosti business.

Nikhat Kazmi
The Times of India
View All Critic Reviews (355)

What? Yeah, this movie was kind of awesome. Except, really, Winona Ryder? Smallest part ever...

I was never a fan of the original Star Trek series or movies but this was one of the best sci-fi movies I have seen in a long time. From beginning to end JJ Abrams and crew did an amazing re-imagining of the Star Trek franchise.