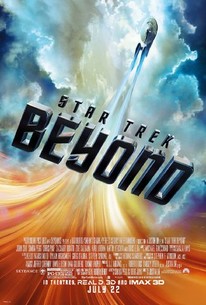 Critics Consensus: Star Trek Beyond continues the franchise's post-reboot hot streak with an epic sci-fi adventure that honors the series' sci-fi roots without skimping on the blockbuster action.

Critics Consensus: Star Trek Beyond continues the franchise's post-reboot hot streak with an epic sci-fi adventure that honors the series' sci-fi roots without skimping on the blockbuster action.

Critic Consensus: Star Trek Beyond continues the franchise's post-reboot hot streak with an epic sci-fi adventure that honors the series' sci-fi roots without skimping on the blockbuster action.

Captain Kirk and the crew of the Enterprise encounter an alien warrior race when marooned on a distant planet after the destruction of their spaceship in this thrilling sequel directed by Fast & Furious director Justin Lin.

Shohreh Aghdashloo
as High Command of the Federation

John Chou
as Sulu
View All

News & Interviews for Star Trek Beyond

View All Star Trek Beyond News

Critic Reviews for Star Trek Beyond

A fun popcorn movie that highlights the value of teamwork and a good playlist (priceless core values in life).

The result is a taut piece of filmmaking, with perfectly choreographed action scenes and a rapid-fire pace that only leaves time to gasp for air

The best thing about Beyond is that it remembers that the core strength of Star Trek is the camaraderie and friendship of the Enterprise's leadership unit.

Maybe if Star Trek Beyond were stupider it wouldn't feel like such a chore.

"Beyond" is undoubtedly messy, like a Starfleet ship that's taken its fair share of beatings, but it is frequently a reminder of how good the series can be when all its engines are in working order.

It does seem strange that a franchise whose original appeal was futuristic should now be treasured entirely as faithfully retrospective. But there it is.

With the same level of heroism and determination exhibited by Enterprise crew members as they overcame Klingons, Romulans and William Shatner's stint in the director's chair, this overcomes a troubled history to emerge as another winner in the franchise.

The breeziest and most enjoyable film of the [Kelvin] Timeline [and] the one most reminiscent of the beloved 1960s television show.

Minor gripes aren't enough to spoil a smartly-paced movie which loads its crowd-pleasing action sequences with emotional repercussions that keep you fully invested.

For all the talk of fighting humanity's battles, this is the least human Star Trek yet.

The tension is fleeting, especially when the majority of action sequences are so heavily augmented by CG that any genuine stunts disappear in the visual chaos.

Star Trek Beyond also serves as a fitting and respectful end for these group of characters. Just like what Skyfall did for James Bond on their 50th anniversary, this is the real start of the adventures of the Starship Enterprise.

Audience Reviews for Star Trek Beyond

I think this was the 3rd movie that the Star Trek reboot really needed. The 1st was riddled with time travel sci fi shenanigans while the 2nd was overwrought with exposition but this? This was a solid, good ol' action adventure that followed a tried and true formula. Which begs the question, what will be next? A repeat of this and the franchise may be branded as lazy, or not "Star Trek" enough. I just hope these films don't deteriorate into another overloaded Hollywood Sci Fi action-adventure. There's a balance of sophistication and fun still to be found on this "final frontier"

As usual, this film in the rebooted Star Trek series has a superb soundtrack and spectaular visual effects. The sets, costumes and makeup are second to none. The script was adequately paced and the film was well edited. However, even more so than in prior installments, the acting was unimpressive but it was still suffficiently immitative of the original crew. And as if the plot devices had been taken from Romulan pulp fiction, the story was weird and a bit confusing at times. Overall, "Beyond" is a good film, but it just does seem to make the leap to warp speed.

Star Trek Beyond presents a surprisingly exquisite tale filled with stunning visuals, humorous quirks and strong character arcs and chemistry. While the film is not without its share of slips it's still an entertaining and improving addition to the revamped space saga. 4/5