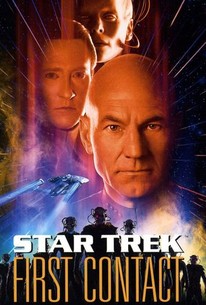 Critics Consensus: While fans of the series will surely appreciate it, First Contact is exciting, engaging, and visually appealing enough to entertain Star Trek novices.

Critics Consensus: While fans of the series will surely appreciate it, First Contact is exciting, engaging, and visually appealing enough to entertain Star Trek novices.

Critic Consensus: While fans of the series will surely appreciate it, First Contact is exciting, engaging, and visually appealing enough to entertain Star Trek novices.

Capt. Picard and his crew pursue the Borg back in time to stop them from preventing Earth from initiating first contact with alien life.

Scott Have
as Guard

Julie Morgan
as Singer in Nightclub

Don Stark
as Nicky the Noose

Dan Woren
as Borg
View All

This is why we go to Star Trek: for a tomorrow of promise and possibility and stories that lift us from the muck of what we are to the summit of what we might learn to be.

It's easily one of the best in the series -- the best, in fact, since Leonard Nimoy and the old Enterprise crew saved the whales in "Star Trek IV."

In zooming out from Picard's glinty eyeball, this eighth feature film from the Trek factory displays a zippy new energy and a sleek, confident style fully independent of its predecessors.

First Contact is no grab bag of camp gewgaws; it stands proud and apart, accessible even to the Trek-deficient. This old Star, it seems, has a lot of life in it.

The elegance of the story is enhanced by the sure direction of Jonathan Frakes, who also plays Commander William Riker.

A smashingly exciting sci-fi adventure that ranks among the very best in the long-running Paramount franchise.

The best cinematic outing featuring the Next Generation cast, one that found a great story to tell featuring the Borg, one of the franchise's greatest antagonists. (25th anniversary)

The dialogue has improved and the story elements are more in tune with the show, but there's a wealth of unrealized potential and an equal amount of underdeveloped concepts.

If you carry the Star Trek gene, you'll be camped on this already.

At once hopeful and dark, First Contact is a rousing space opera with terrific characterisation, performances, and surprisingly well-aged visual effects.

It's clear immediately that filmmaker Jonathan Frakes isn't looking to deliver just another episode of the TV series here...

First Contact just works. It works as a rousing chapter in the Star Trek saga, and to a lesser extent it works as mainstream entertainment

no one knows if cyborg technology is possible, but if it is, then Star Trek the Next Generation is what gave us one of our first glimpses at this idea, and with the First Contact, they go full force with it. First Contact revolves around Captain Jean Luc Picard of the U.S.S. Enterprise having constant flashbacks to his time when he was Locutus, his Borg Persona. While these flashbacks are happening, the Borg are starting to strike back and go for the ultimate blow, they go back in time to stop man having first contact with the Vulcan Race, so its up to Picard and his team from the series to go back in time to fight his old enemy. The whole cast from the show returns in this film like in Generations and the two sequels after this, and they all do their usual great jobs, especially Patrick Stewart as Picard. Stewart was always one of my favorite actors and he always played my favorite captain out of the two main captains from the two main series, and here he goes all out because this movie mainly focuses on him and his struggles with the borg. The two new actors are JAmes Cromwell, Alice Krige, and Alfre Woodard and they all do very well for one time characters in this film. James Cromwell does very good at playing the alcoholic pilot Zefram, he's both a funny character and a serious character just being a drunk trying to make sense of everything, and Woodard does a good job as his best friend who is stuck on the Borg ship trying to get out. Though the one person who steals the show in terms of newcomers is Alice Krige as the Borg Queen, she is just chillingly well acted and she is up there with some of the creepiest villains of all time. You may have known Krige as Morgana in the Sorcerers Apprentice or Christabella in the Silent Hill movie, which she also does very creepily well. The villains in general are also very creepy and many points in the movie actually scared me and they made the film feel like a horror movie and though I will admit that that feels weird for a star trek movie, it is very well done. Though many of the Star Trek movies are very slow films and are very long with very little amounts of big entertainment value, but to me, this is the most entertaining of the star trek movies, and while I like Generations, Search for Spock, and think that Journey Home is funny, they just don't hold a candle to the entertainment that this movie gives to the viewer. The effects look great, the characters are well acted and developed, the action is spectacular, the film has some good comedic moments, and the entertainment value is fantastic. If you can see any star trek movies, see this one. My overall rating 4.5*s out of 5

The eighth Star Trek film (and second of The Next Generation) boasts incredible special effects and makeup, as well as an urgent plot and a most sinister, terrifying villain - and the subplot involving Data captured by the Borg is certainly the best thing in it.

Second film (or sequel?) for the next generation crew and this time there is no hint of the classic crew what so ever, its all new now baby. So this next Trek rumble is a lot more straight forward plot wise and probably has the most action seen for awhile. Quite simply the Borg are on the rampage and out to assimilate pretty much everyone they can, namely all of Starfleet. This goes a little pear shaped for them so they jump through time to assimilate the entire Earth...the naughty rascals. Is time travel a regular function for everyone in the Trek universe? handy if so. I liked this film for the simplicity of everything and the fact you get some basic action mixed with some genuine tension along with the insecurity of not knowing what may happen, seeing as its the Borg. Bottom line there are plenty of deaths or assimilation's (close enough), a decent baddie, some good back story to Earth's future and plenty of phaser action. Its not exactly a top notch sci-fi action flick lets be honest here, this is no Die Hard in space. Visually most things still have that TV show quality only on a slightly grander scale. Everything looks a bit plastic amongst the obvious plastic sets. Effects again are more CGI based than models unfortunately. The space battle against the big Borg cube ship thing at the start actually looks like a videogame sequence, obvious CGI without weight or depth. I know this is still only 96 but geez you'd think they could do better, compare this to Star Wars! The deadly Borg look quite decent with some good facial makeup but their cyborg body armour, weapons and general body attachments do look pretty rubbery and plastic. I really don't know who decided to put silly little flashing lights all over the shop, it just makes everything look so childish and fake. Data again suffers with this indignity, when his android under layers are revealed it just appears to be bare grey plastic with stupid flashing fairy lights all over, so very crap looking. As for the bad guys I do like them, space zombies if you will, lets face it that's what they are really. Part robotic and part organic space zombies from the planet Romero. I do like the Borg as they do actually come across as creepy plus they manage to add real tension and dread to a Star Trek film. Can't really over look the fact they are a mixture of various ideas from various other sci-fi/horror films all pieced together ('Hellraiser' springs to mind). Plus the fact that they transform whole areas into cold dead robotic hives that visually appear the same as the Borg themselves kinda copies ideas used in 'Aliens' but hey ho. Apart from that the Borg are quite a cool creation and do actually add a genuine threat to the Star Trek universe. Yet at the same time they kinda don't fit in the Trek universe, they're almost too cold, calculated and merciless for the family friendly franchise. Not sure I ever really liked the design of their ship (I guess its a ship), why is it merely a large cube? what's the deal with that? On a final note why are they called Borg? are they Swedish? The Borg queen is a nice touch to the faceless enemy that does come across as an interesting character, not just a cyborg on auto pilot. She also has some really good prosthetic makeup on the face and chest regions, looks that bit more realistic than the other drones. A definite improvement over the last rather dull film, a basic story which is more savage and quite dark in places, although not too extreme of course. I did notice this is another film where actually having some knowledge of a previous TV episode/s is slightly required. They got away with it for 'Star Trek II' and I believe they got away with it for this film also, but seeing that particular episode would appear to help when watching this film.

First Contact is a brilliant film that has highly entertaining from start to finish. This, for me, is yet another great sequel in the franchise, and one of the finest entries in the series in the 90's. The cast all bring some great to the film, and overall, this is the most ambitious, film in the series, only topped recently by Star Trek Into Darkness. This possesses everything you'd expect from a very well crafted Star Trek film, and it has a well crafted storyline, good action scenes, and enough thrills from start to finish to satisfy genre fans. What First Contact does well is to amp up the stakes in terms of scope, and it furthers the formula even more into new territory that delivers a terrific film going experience. This entry is one of the best Star Trek films I've seen, and it is a well directed affair, one that is thoroughly exciting from the first frame onwards. Even for non Star Trek fans, this is worth seeing because it's a film that has some well executed action scenes, and it's a fine example of genre cinema. Aside from the recent Star Trek films, this is one of my favorites, and the way that the story is told, mixed with engaging performances, makes this a must see film that will even appeal to genre skeptics. Even if you're not big into this particular genre, Star Trek First Contact is a strong picture that elevates the genre significantly. I enjoyed this film, even more so than other previous entries, and it ranks as one of the very best films in the Star Trek series. With a well crafted story, great effects, wonderful performances, this is a memorable and thrilling genre film that should be enjoyed by anyone that is looking for a highly entertaining Science Fiction film to watch.