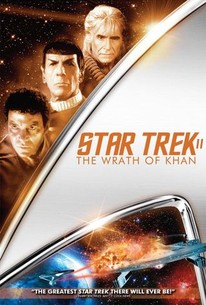 Critics Consensus: Considered by many fans to be the best of the Star Trek movies, Khan features a strong plot, increased tension, and a sharp supporting performance from Ricardo Montalban.

Critics Consensus: Considered by many fans to be the best of the Star Trek movies, Khan features a strong plot, increased tension, and a sharp supporting performance from Ricardo Montalban.

Critic Consensus: Considered by many fans to be the best of the Star Trek movies, Khan features a strong plot, increased tension, and a sharp supporting performance from Ricardo Montalban.

Star Trek II: The Wrath of Khan is fondly regarded as being the closest in spirit to the 1966-69 TV series that spawned it. Admiral Kirk (William Shatner) escapes the tedium of a desk job to join Mr. Spock (Leonard Nimoy) and Dr. Leonard "Bones" McCoy (DeForest Kelley) on another space mission. While boldly going where no man etc. etc., Kirk crosses the path of his old enemy Khan (Ricardo Montalban), who as any die-hard Trekker can tell you, was the chief antagonist in the 1966 Trek TV episode "Space Seed." Leading a crew of near-savage space prisoners, Khan insinuates himself into the Genesis Project, which is designed to introduce living organisms on long-dead planets. Intending to harness this program for his own despotic purposes, Khan engages in battle with the Enterprise crew. ~ Hal Erickson, Rovi

News & Interviews for Star Trek II: The Wrath of Khan

View All Star Trek II: The Wrath of Khan News

Critic Reviews for Star Trek II: The Wrath of Khan

The dull thud of Nicholas Mayer's direction, which mixes the custardy platitudes of the original television series with some of the less-thunderous special effects of the latter-day cinema, has everything in place, like a tidy housewife's kitchen.

Star Trek II tells a sock-'em story, which is more than can be said for the first Star Trek movie. Nicholas Meyer, an energetic director, is a master of narrative, and Star Trek II crackles with his wit.

Star Trek II: The Wrath of Khan is the movie that should have been made the first time around.

Shatner and Montalban never share the same space, but their face-offs highlight the film, as they both wring every drop of drama out of their lines.

Director Nicholas Meyer plays off the light and the dark of the story against each other with flair and command.

It's TV all the way: The actors race up and down plastic corridors in the same old story about the universe almost coming to an end.

Fans of the Starship Enterprise will be ecstatic while others will find in this production a certain sluggish pace amid rather fine special effects.

In the end, it makes for a beautiful summary, an envoi from which one can circle back through the re-runs and consider Star Trek as a finished whole. Even if they never make another, the saga can stand complete.

Bottom line is that they have returned to the things that made the series so successful for so long.

Both pensive and action-packed.

There's a wonderfully playful quality among Shatner, Nimoy and Kelley as the ship's top officers.

Director Nicholas Meyer has made this Star Trek an intelligent and slam-bang thriller with a Saturday matinee serial air.

Audience Reviews for Star Trek II: The Wrath of Khan

An exceptional movie that offers everything that a Star Trek fan could ask and more: wonderful performances, engaging drama, tension, memorable dialogue, a fascinating villain bent on revenge and an incredibly well-constructed plot with an unforgettable ending.

And this is coming from an adamant "definitely not a fan" of the original series.

This is the second movie in all of the "Star Trek" movies, and it's considered the best(I've only seen this and the first one). This is miles better than the first movie, and really showcases a great story, with great characters. A guy I work with recommended I watch an old episode called "Space Seed" first. It's not mandatory, but it's a great thing to do, because it gives a great set up, and you get to see why Khan and Kirk hate each other. The effects are very dated, and the acting is just awesome. Awesome, because it's all overacted, which for a movie like this works well. When Kirk yells Khan, it's just awesome. I like the Abrams movies better, but this makes me want to continue with the old movies to see where it all goes. Good movie that's still good 30 years later.