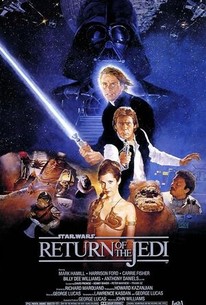 Critics Consensus: Though failing to reach the cinematic heights of its predecessors, Return of the Jedi remains an entertaining sci-fi adventure and a fitting end to the classic trilogy.

Critics Consensus: Though failing to reach the cinematic heights of its predecessors, Return of the Jedi remains an entertaining sci-fi adventure and a fitting end to the classic trilogy.

Critic Consensus: Though failing to reach the cinematic heights of its predecessors, Return of the Jedi remains an entertaining sci-fi adventure and a fitting end to the classic trilogy.

In the epic conclusion of the saga, the Empire prepares to crush the Rebellion with a more powerful Death Star while the Rebel fleet mounts a massive attack on the space station. Luke Skywalker confronts his father Darth Vader in a final climactic duel before the evil Emperor. In the last second, Vader makes a momentous choice: he destroys the Emperor and saves his son. The Empire is finally defeated, the Sith are destroyed, and Anakin Skywalker is thus redeemed. At long last, freedom is restored to the galaxy.

If the revels of Star Wars are indeed now ended, Jedi couldn't have been a better resolution for them.

"Return of the Jedi," the final act of George Lucas' first "Star Wars" trilogy, is the best one yet.

There are all sorts of hints in the latest escapade (notionally directed by Richard Marquand) that we are meant to be taking it seriously.

It's everything it ought to be -- glorious, exhilarating, exciting, absorbing, technically wondrous. But there also is something bittersweet in the knowledge that, with Jedi, we are bidding a fond farewell to all of the characters we got to know so well.

The characters and dialogue get lost somewhere between the bug-eyed monsters and the exploding spaceships, but it is all so much fun it probably really does not matter a whole lot.

With this last of the central Star Wars cycle, there is the sense of the closing of a circle, of leaving behind real friends. It is accomplished with a weight and a new maturity that seem entirely fitting, yet the movie has lost none of its sense of fun.

...the decline that began in The Empire Strikes Back has becomes a malaise by now, with continuity stretches making nonsense of the narrative...

It's well constructed, tonally in spirit, and hugely enjoyable, but the Force simply isn't as strong in this one.

An enthralling resolution that brings the epic story of Darth Vader to a close.

A premonition of what future Star Wars films would be like, good and bad, and why.

While Star Wars: Episode 6 - Return of the Jedi isn't as great as its immediate predecessors, the film ends the trilogy on a bang.

Exciting, intense and, once finished, leaves us wanting much more. [Full Review in Spanish]

A powerful, albeit flawed, conclusion to the trilogy.

Return of the Jedi, while a reasonably satisfying finale to the original trilogy, does not match the heights of the previous two films. It is pigeon-holed somewhere in the middle: not quite dark and mature enough to match Empire Strikes Back and not free-spirited and original enough to match A New Hope. The tone is more in line with the first film, but after Empire you want them to continue to get more mature and that didn't happen. The main aspects of the plot certainly are fine, but the subplots involving the Ewoks and rescuing Han seem kind of shoe-horned in. Ultimately, it is entertaining and certainly still worth watching, but a mild disappointment because of the high expectations of following Empire.

After a cliff hanger ending in The Empire Strikes Back, the Star Wars (original) Trilogy concludes with Return of the Jedi, a film that while great and entertaining, doesn't quite live up to the majesty of the previous two installments. The film opens with our heroes led by Luke Skywalker (Mark Hamill) attempting to rescue Han Solo (Harrison Ford) from overgrown slug Jabba The Hutt. Meanwhile, the Empire have begun construction on another Death Star that will culminate in a three front battle on the forest moon of Endor, in space, and the final confrontation between father and son with the Emperor (Ian McDiarmid) as an active audience. Return of the Jedi is a fine adventure film, full of fun and excitement. The problem really boils down to the fact that it seems that the story seems to rehash the previous two entries, especially the first one. The Cantina scene returns with the numerous alien creatures hanging around Jabba's palace. The Death Star once again becomes the powerful weapon that can destroy the Rebellion. I would add the final duel between Luke and Darth Vader, but this time it feels different. Luke has matured into a contemplating Jedi, not a head strong young man just wanting to save his friends. There is a nice arc to each character in this film. Luke's arc from farm boy to the last of the Jedi Knights. Han from smuggler to war hero. Leia (Carrie Fisher) no longer seeming as regal, but more revolutionary. It's magnificent that this trilogy actually has character grow instead of being set personalities, never to change. Once again, praise must be heaped on writer Lawrence Kasdan. This may be George Lucas' story, but Kasdan makes it a living piece. Even though the film isn't as great as Star Wars or Empire, Return of the Jedi is a fitting end to the original trilogy and the saga up to that point. Conclusions usually aren't the greatest things to see, but with Return of the Jedi the film makers do this franchise justice. A fitting ending for the adventurous characters created by George Lucas.

Fresh off two fantastic films, comes "Star Wars Episode VI: Return of the Jedi," an overlong, yet satisfying finish to a great trilogy. It drags out the story a little too much, before reaching the climax that is worth waiting for, but having a film that is longer than the first two, while not as good, is kind of a let down in some aspects. With some dumb humor and odd new characters, the third installment in the original "Star Wars" trilogy is good for the fans, but it will not gain any new viewers. I found myself resting my head through this film, waiting for the excitement to happen, and when it does, it really does, but that's all. Well directed, well acted, and well written, it's memorable for many reasons, but is the least enjoyable in this trilogy.