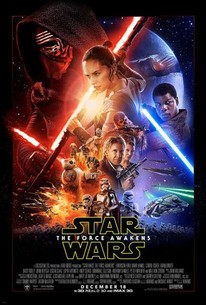 Critics Consensus: Packed with action and populated by both familiar faces and fresh blood, The Force Awakens successfully recalls the series' former glory while injecting it with renewed energy.

Critics Consensus: Packed with action and populated by both familiar faces and fresh blood, The Force Awakens successfully recalls the series' former glory while injecting it with renewed energy.

Critic Consensus: Packed with action and populated by both familiar faces and fresh blood, The Force Awakens successfully recalls the series' former glory while injecting it with renewed energy.

In this thrilling continuation of the epic space opera, ex-stormtrooper Finn (John Boyega), scrappy desert dweller Rey (Daisy Ridley), and droid companion BB-8 get caught up in a galactic war when they come across a map containing the whereabouts of the vanished Luke Skywalker (Mark Hamill). They soon embark on an epic adventure that brings them face-to-face with heroes from the past, as well as new villains such as Kylo Ren (Adam Driver) and the First Order, a fascist regime that has emerged from the ashes of the old Empire.

The 50 Highest-Grossing Movies of All Time: Your Top Box Office Earners Ever Worldwide
87 Fearless Women Movie Heroes Who Inspire Us
Star Wars Prequels vs. Star Wars Sequels: Which Trilogy Is Better?

It's both nostalgic and fresh, a tender homage to, especially, the initial Star Wars ("Episode IV: A New Hope"), as well as a bridge to help those of us stuck in the splendor of Hoth edge into the future.

Star Wars: The Force Awakens gives new life to a franchise of hope, resilience, courage and family that's been missing from theatres for far too long.

Star Wars: The Force Awakens honors the series and takes it in exciting new directions. Both The Millennium Falcon and millennials, it would seem, are in good hands.

'The Force Awakens' does what the original films did well - and is also its own, thrilling thing.

Despite the copious servings of tragic threats and good feelings, the production sinks under the weight of its emotional calculation.

It all comes together nicely as the actors breathe vulnerability, fallibility and personality into their roles, with Daisy Ridley being quite the commanding presence. My favourite, hands down, is the cute and rotund droid BB-8.

With all the heart and soul of the series we love, it's undoubtedly set to be a favorite for the years to come.

Whatever the story, rest assured Abrams will ensure that the force is as strong as ever before.

The great delight of The Force Awakens is the melding of old and new seamlessly.

A successful Star Wars movie isn't really about clever story or spectacle, it's about something much harder: creating a feeling.

Watched under protest. I'm really not a fan of these movies. It's big budget and fans will love it, but I was bored.