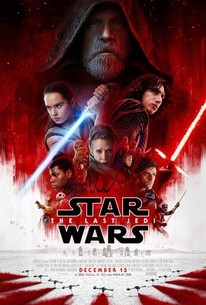 Critics Consensus: Star Wars: The Last Jedi honors the saga's rich legacy while adding some surprising twists -- and delivering all the emotion-rich action fans could hope for.

Critics Consensus: Star Wars: The Last Jedi honors the saga's rich legacy while adding some surprising twists -- and delivering all the emotion-rich action fans could hope for.

Critic Consensus: Star Wars: The Last Jedi honors the saga's rich legacy while adding some surprising twists -- and delivering all the emotion-rich action fans could hope for.

In Lucasfilm's Star Wars: The Last Jedi, the Skywalker saga continues as the heroes of The Force Awakens join the galactic legends in an epic adventure that unlocks age-old mysteries of the Force and shocking revelations of the past.

Brian Herring
as BB-8 Performed By

Dave Chapman
as BB-8 Performed By

The success of The Last Jedi, like its father before it, will most likely rest on the conclusion of the trilogy.

It's the one we've been waiting for.

"Star Wars" is not "Breaking Bad," and the same narrative tricks that worked for the latter feel jarringly out of place in the former.

Star Wars: The Last Jedi may not be perfect, but the need to accept imperfection and keep going becomes one of the movie's themes...It's about mentorship that's invigorating rather than smothering.

What's most interesting to me about The Last Jedi is Luke's return as the mentor rather than the student, grappling with his failure in this new role, and later aspiring to be the wise and patient teacher.

With Johnson at the helm, the torch-along with the lightsaber-is safely passed to a new generation.

Rian Johnson has given us a Star Wars film that actually is a genuine evolution of the series in style, narrative, and emotion.

As a sensational Star Wars vehicle and a pensive reminder of ideals for any age, The Last Jedi holds its lightsaber high - a beacon for what these films can be, and what they can impart.

As much into de-mythologizing the Force as it is relishing in its fantastic fight choreography and intergalactic dogfights.

The Director and The Jedi is long on time but has enough sentiment to satisfy.

Not all its risks pay off, but its biggest wins outdo anything in the previous film. For fans, there are many, many moments that will leave you cheering or weeping, possibly both at once.

Doing a fantastic job in fleshing out its characters and their motivations even more amid exciting battle scenes and intelligent twists, The Last Jedi proves to be one of the most mature, epic and consistent films of the franchise to date in the way it explores its main themes.

All in all The Last Jedi is another triumph for the franchise, but one can't help but wonder if it could have been written neater to seem less like 3-4 episodes of a TV show and more like an actual movie. For a film that runs so incredibly long it sure as hell doesn't address quite a few plotholes either. We still have no idea who, how or where Snoke came to be or who the alleged "Knights of Ren" are that Kylo took with him in his rebel against Luke. It also has time to create new plotholes like how did Rei suddenly become so adept with a Lightsaber when Luke literally taught her no combat skills or why is Finn still considered a main character? It fails as a sequel in the sense where it races to tell us more before resolving questions inspired from it's predecessor. This isn't to say The Last Jedi is 152 minute failure though, in fact outside of the former problems mentioned I think it did an exceedingly great job bringing new character ideas and story elements into the franchise. Especially the relationship between Kylo and Rei as they walk parallel with each other in discovering their connection/role with the Force. A lot of the subplots went beyond expectations because it's arguably there just so there's epic Sci-Fi battles to be had (A necessity in a Star Wars film, no?) I was really impressed with how much newcomers Dern (Admiral Holdo) and Tran/Ngo (Rose and her sister) quickly became favorites on screen. I stepped out of the theater exhausted but still pretty satisfied with my Star Wars experience. Like The Force Awakens there's a lot of nodding to existing lore in the franchise and a lot of new stuff to sink your teeth into, I just wish it was written and presented more efficiently. There seems to be a lot of the general negativity from fanatics. They're probably just unhappy with where they're taking the story or certain characters, it's unfortunate but loyalists will always hold onto that sense of entitlement.

The first of the Star Wars franchise to saturate itself with that which everyone only talks about in the other outings: The Force. Duh. It's all anybody talks about, but hardly seen enough, used enough. But this one investigates just a little, eh? About time. And what about The Force? Does ability to access it's power guarantee happiness, for instance? Nooooooo, and the story follows those who can do so, and those poor souls who can't, making it the best Star Wars since ... The Empire Strikes Back. All this, and the set-up for what comes next. Well done indeed.