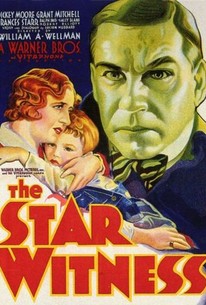 Star Witness starts out as a homey family comedy and develops into a rather gutsy thriller. Chic Sale plays a cantankerous Civil War veteran who, while visiting his family, witnesses a gangland shooting. The rest of the family also gets a good look at the gang boss (Ralph Ince) and everyone agrees to testify in court. But the criminals terrorize the father (Grant Mitchell), after failing to bribe him. To insure pa's silence, his son (Dickie Moore) is kidnaped But Grandpa is not easily cowed, and it is he who goes before the jury to expose the crooks. He also engineers the rescue of his grandson (a surprisingly credible sequence). Star Witness was remade as I Am Not Afraid in 1939, with updated dialogue equating American gangsters with Hitler and Mussolini.

There are no featured reviews for Star Witness at this time.