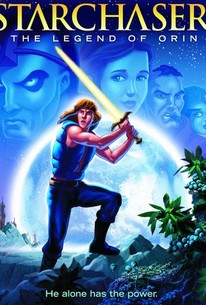 In this 3-D animated cross between Star Wars and the Knights of the Round Table, young Orin (voice by Joe Colligan) lives in an oppressed, underground world in which humans have become the slaves of robots. One day the hero finds the handle of a sword and in a vision is told that if he can locate the blade, he will be able to overthrow the robots. Off he goes on his quest, up to the surface world where he meets and teams up with Dagg (voice by Carmen Argenziano) to face the evil empire in a series of daring battles. Along the way, Orin and Dagg have their own love interests, and a bit of swarthy language occasionally peppers their conversation as well. Parents should be advised of these two excursions into a more adult world, otherwise, most moppets would enjoy the fast-paced tale of heroism and adventure.

Critic Reviews for Starchaser: The Legend of Orin

Never realizes its own ideas to their full potential.

...incredibly blatant and shameless rip-off of the Star Wars movies...

Audience Reviews for Starchaser: The Legend of Orin

There are no featured audience reviews yet. Click the link below to see what others say about Starchaser: The Legend of Orin!

Starchaser: The Legend of Orin Quotes